Kovalchuk proposes several theories about the death of Pavel Dremov.  Dremov was the commander of the Sixth Motorized Infantry Cossack regiment of the Peoples Militia of the Luhansk Peoples Republic (LPR).

Recall that Dremov died on Saturday, 12 December, along with his driver, when his car blew up, on the road between Pervomaisk and Stakhanov.

[yalensis:  Some sources say that Dremov had just gotten married the day before, and I am unable to find any details about the wedding, or even the name of his bride.  Kovalchuk, on the other hand, states that Dremov was on his way TO his own wedding when he blew up.  I cannot find an explanation for this discrepancy.]

The Public Prosecutor of the LPR has stated, that the explosion was caused by a bomb pre-planted in the car.  Dremov’s death ignited the blogosphere with various theories and pitted against each other opponents and proponents of the current ruling party in LPR, led by Igor Plotnitsky.

Kovalchuk attempts to sift through the meager facts about what is known so far.

Kovalchuk dismisses this theory fairly quickly.  Locals were quick to blame nefarious “special ops” assassins sent by Kiev.  But in the heat of the moment, they tend to blame Kiev very quickly, just as Kiev tends to blame the Kremlin for everything that goes wrong.  Diversionaries would have had to sneak into Dremov’s wedding party and install a bomb in his car.  And this wasn’t a simple bomb that went off when you turned the key in the ignition:  it would have to be a more complicated device, controlled from a distance, after the automobile had already been driving for some time, and had even stopped once at a filling station.  Why go to all that trouble?

Moreoever, if diversionaries had that kind of equipment, then why go after a small-fry like Pavel Dremov?  Why not take out Givi or Motorola?  In which case Kiev would declare a national holiday.  And, by the way, Kiev denies it had anything to do with Dremov’s death. 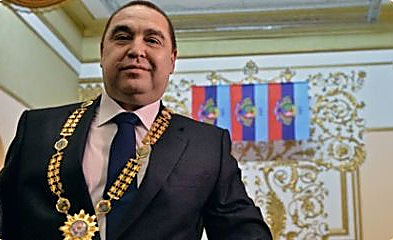 The second theory is more popular among those in the know.  On the one hand, LPR commanders ARE dropping like flies; and on the other hand, Plotnitsky perfectly looks the part of a slab-faced gangster, straight out of Hollywood Central Casting.  It can’t all just be a coincidence, can it?

[yalensis:  Sidebar discussion not in the Kovalchuk piece, this is background info from wiki in support of Theory #2:

Dremov, a 37-year-old former bricklayer and Cossack commander, had a vision of a neo-soviet socialist LPR “that works for the poor and elderly”.  To this end, he was an opponent of the Minsk Accords and wanted to continue the war for Donbass independence.  All of this, naturally, would have rubbed Plotnitsky the wrong way. ]

Kovalchuk dismisses this theory as well.  Dremov was no threat to Plotnitsky.  For starters, the men loyal to Dremov had successfully integrated into the regular army of the LPR, and Dremov himself had received an award from Plotnitsky’s hand.  To be sure, there had been a struggle to incorporate and integrate the irregular units.  But that was in the past.  And, in any case, even if Plotnitsky decided to whack Dremov, why do it on the day of the poor guy’s WEDDING?  Which would instantly turn him into a martyr.

The corollary of the “Plotnitsky Dunnit” theory is that Plotnitsky is backed by Russian special forces; hence, it is actually Russia that is being accused here.  Of whacking people, especially Cossacks, who are inconvenient to whatever betrayal of the people of Donbass they are cooking up next.

Internal strife within the movement.  Jealousy, competition.  Office politics, in other words.  The Cossacks of Stakhanov are not immune to these faults.  And should one not be suspicious of Dremov’s former underling who gifted him with the expensive Land Rover?  And do Cossacks not fight among themselves for power and  spheres of influence.  And is this not the kind of office politics, where everybody carries a weapon?

Kovalchuk dismisses this theory as well.  Would Dremov’s former underling, Evgeny Borshchevsky, really be so stupid as to give his boss a Land Rover already equipped with a bomb, like some kind of optional accessory?

The final theory is that the whole thing was an accident.  Maybe Dremov was carrying some explosive material in his car, and it just went off?  Kovalchuk points out, that this is a more common occurrence than one would think.  Careless handling of dangerous substances, by otherwise intelligent military men who do not always follow safety protocols.

Kovalchuk also postulates the existence, in the automobile, of lots of weaponry, in addition to explosive substances; and also the possibility that both driver and passenger might be under the influence of alcohol.  After all, they were on their way to a wedding.  Even without alcohol the situation is dangerous enough:  After all, people in the Donbass fight with weapons that were manufactured 30 and even 50 years ago.  Under such conditions, where safety rules are not observed, anything can happen.

Like Loading...
This entry was posted in Breaking News, True Crime and tagged Igor Plotnitsky, Pavel Dremov. Bookmark the permalink.