Journalist-Killing “Peacekeeper” Site Back Up and Running – Part II

So, supposedly, under P.R. pressure from outraged Western journalists, the Ukrainian government ordered the “Peacekeeper” website (which is, in essence, an assassin’s hitlist) to be taken down.

But wait!  What about Freedom of Speech?  Doesn’t Democracy mean that people have a right to browse their most beloved website?

And sure enough, “the people” came out into the streets demanding that “Peacekeeper” be put back up!  The story, by Marina Kalegina for Life News shows “radical activists” storming the Ukrainian Ministry of Information building, demanding the firing of a woman named Tatiana Popova.  Popova is the Deputy Minister of Information, and is the one they blame for ordering the site to be taken down.  This all happened, by the way, on May 19, one day before another set of exciting events, in which the same groups of “radicals” stormed the Rada itself, pretending to demand the end of the Poroshenko government.

When police arrived to maintain order at the Ministry of Information, the “radicals” brought in reinforcements:  goons from the neo-Nazi “Right Sektor” political party.  Along with other goons from Right Sektor’s International neo-Nazi Brigade, which is called C14.  Here is some information I gleaned about C14:

A Swedish member of C14, image from a couple of years ago…

The “18” in Combat 18 stands for the first and eighth letters of the alphabet=AH=Adolf Hitler.
At the same time, the name points to the number “14.” In fascist circles this refers to the “fourteen words” slogan of commitment to the “white race.” As the leader of Svoboda’s ally “C14” explained, his organization is in a “struggle” with “ethnic groups” that are wielding, among other things, “economic and political power.” The “ethnic groups” he is referring to are “Russians and Jews.”

The “14 words” by the way, can apparently refer to either one of these two slogans; both are considered equally acceptable to the neo-Nazi:

or, alternatively and somewhat more sentimentally:

Moving right along to the related interview…

Ukrainian blogger-in-exile Anatoly Shariy nostradamized pessimistically, in this interview with VZGLIAD, that (1) the actions of the “radicals” will go unpunished, like they always do; and that (2) the Peacekeeper site will continue to function, with the blessing of Herashchenko/Avakov.

One word about Shariy:  Although Western media refer to him, contemptuously, as “pro-Russian” (and to them that sobriquet is a moral condemnation, because a Russian or a pro-Russian must be the worst type of human being, ever), he wasn’t always that way.  Shariy started off as a pro-Ukrainian patriot.  He was, and remains, pro-European in his views.  It’s just that he changed his mind about a lot of things after witnessing the brutality and idiocy of Maidan, it’s as simple as that.

In any case, Shariy’s predictions turned out to be correct.  Right after the demonstration of the neo-Nazi “radicals” on May 19, Herashchenko announced that the people had spoken; their voices had been heard; and the site was back up and fully functional.

Here are Shariy’s words:  “This Peacekeeper site will never be closed.  Nobody has any influence on that scoundrel [Herashchenko], who happens to be psychologically unsound, just like all of [Avakov’s] assistants.  They will keep pretending that nothing is going on, even if people start getting beheaded in the streets.  This is the way it is here.”

Shariy goes on to discuss the scandal concerning the hacking of journalists data and their publication on Avakov’s hitlist:  “And by the way, nobody paid any attention to the Ukrainian journalists.  They were only concerned about the European ones.  And the scandal, by the way, was squelched pretty quickly.  I (originally) thought it would go on for a couple of months, at least, with people pretending that nothing had happened.  But no, just a couple of days went by, and already that inadequate person [Herashchenko] is making new announcements, and the site is going back up again.”

Shariy goes on to prognosticate pessimistically about the high level of totalitarianism achieved in his native country:

“Why not publish the data on newborns?  As in, a child has been born to Separatists.  They could post his photograph and personal data, along with the comment, ‘Would be good to kill him.’  This is Ukraine, after all.  Anything is possible.” 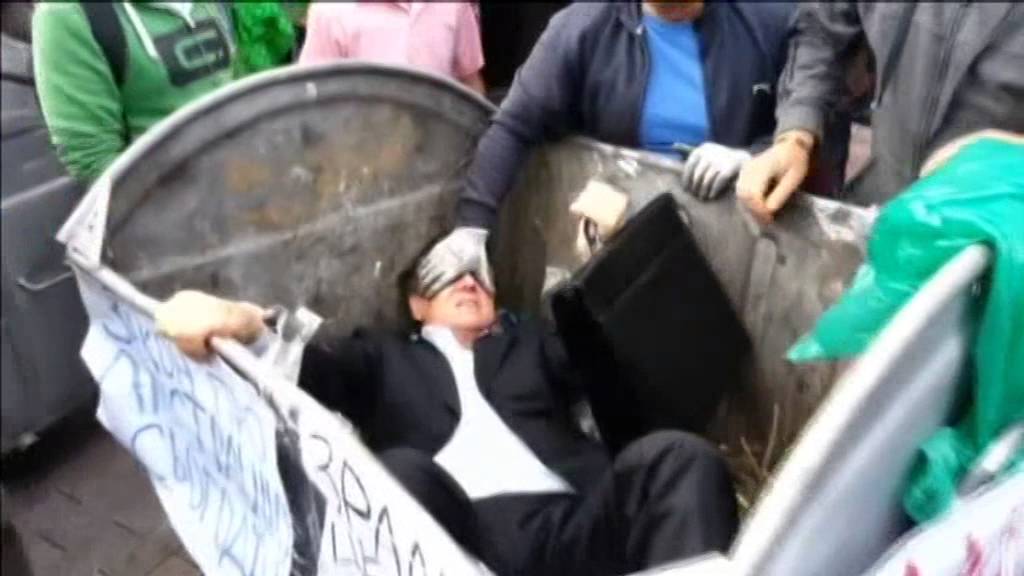 In Ukraine: opponents of the neo-Nazis are dumped in trash bins. What a Country!

“There is no such thing as ‘hundreds of thousands of patriots’, like Herashchenko claims.  They simply don’t exist.  Here’s what is actually happening in Ukraine:  It’s like 1937 all over again, in the very worst sense of the word.  Everybody is snitching on everyone, literally right out there in the town square.  Somebody doesn’t like somebody – he ups and denounces him to Mirotvorec, says the other guy has ‘Separatist’ views.  Or puts up his photograph.  Once a person gets into that database, the completely inadequate police organs start to monitor him.  Now the guy can’t get a job in a bank.  They stop him at the border if he is travelling.  Then they demand a bribe from him.”

As for Popova, Shariy lays it out bluntly, what happened with her:  “This woman, who calls herself a Ukrainian ombudsman, declared that the [Peacekeeper] site is illegal.  After which an advisor to the President sent his goons to attack her, acting with complete impunity.  Threatening to fire her.  And what did she do?  She shut up.  Now she goes around acting like nothing happened.  Now she has taken up the cause of the Crimean POW’s, and Sentsov and Savchenko.  But not another peep out of her about Mirotvorec.  Although she could have appealed to the European ombudsman regarding this situation.  Because this situation is highly abnormal:  When the advisor to a Minister threatens the ombudsman.  But she didn’t do anything about it.  She just sits quietly, receives a significant salary, as does the rest of her team.”

Shariy concludes his interview by stating, pessimistically, that nothing is going to change in the near future.  The Peacekeeper site was “closed” only between 11 and 19 May.  Now it is back up and running, so “Enemies of the State” must be careful to watch their backs.