Today I have this piece from KP describing Alexei Navalny’s new life in a Russian labor colony.  The reporter is Alexander Boiko.  Here is my review of this piece.

Navalny now resides in “Correctional Colony #2” in the town of Pokrov, the Petushinsky Region of the Vladimir Oblast.  This Oblast borders Moscow and Yaroslavl Oblasts and whose fauna, according to wiki, “currently includes more than fifty species of mammals (some examples including elk, wild boar, roe deer, red and sika deer, lynx, wolf, squirrel, rabbit, marten, fox, weasel, badger and other fur-bearing animals), five species of reptiles, and ten species of amphibians.” And now, also, one Navalny.

Navalny’s approximate location is marked in red, in case any CIA commandos out there want to try to go in and rescue him!

Our hero is currently under a 2-week quarantine to make sure he doesn’t have Covid.  After he completes his quarantine he will able to attend the Colony concert on 8 March, celebrating the International Women’s Day Holiday.  And then just a week later, on March 13 there is another holiday:  “Day of the Wardens for Corrective Facilities.”  In addition to concerts and other rehabilitation activities, prisoners are allowed to receive gifts and care packages from their loved ones.  Due to the covid pandemic, the colony no longer allows people to mail in physical packages; however, they can order treats from the online store and be assured they will be delivered to their incarcerated love one.

According to Boiko, the particular colony which is now Navalny’s home, actually has a good reputation.  It’s considered a “soft” place to go, almost like a Camp Cupcake.  First-timers are usually sent there.  Most of the inmates are murderers and other violent criminals, but the good news is, the bandits are not in charge of the camp.  The managers and wardens of this colony are all graduates of the Federal Service Of Carrying Out Punishments (ФСИН), and they do everything by the book.  To be sure, there was a scandal back in 2017 when the Deputy Director accepted a 30,000 ruble bribe from a rapist.  But the scandal was uncovered, and the corrupt official arrested.

How will Navalny cope in his new life among the riffraff?  People like myself who have been following this character for years, are aware that, in all probability, he is a purely white-collar criminal, there has never been even a hint of violence in Navalny’s resume.  He is a con-man, a racist, and a traitor, to be sure; but he is not a brute.  Therefore, one is happy that he is placed in a well-run facility, where he will not be exposed to physical brutality or inhuman conditions.  Nobody actually deserves that, in a civilized society, in my humble opinion.  Let’s just say that he is lucky he is not in an American prison, where torture and degradation of the personality are considered a normal part of the punishment.  He can ask Maria Butina about that. 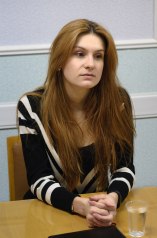 Maria Butina: Served time for the crime of being Russian, was tortured in American prison.

A demographic survey conducted by ФСИН reveals that, in the Vladimir Oblast, the bulk of the colony inmates consist of 50% {murderers, people who committed violent harm to others, and/or misused narcotics}; up to 25% are thieves.  To me, these numbers don’t make sense, why are they conglomerating murders and narcotics offenses?  Don’t even get me started on the war on drugs, that’s one of the prime causes for the destruction of the African-American community in the U.S.  Russia has other problems of its own, of course…

Anyhow, despite the unsavory character of the inmates, the Colony itself prides itself on a wonderful image, as shown in all the photographs.  Everything is clean and neat, there is a little church and even a windmill, as one can see in the attached photograph.  There are images of prisoners learning to paint (and quite well!) and lots of other fun things to do.

The history of this Colony dates back to 1974

At that time it was called the Rehabilitation Prophylactic Facility #2 in the town of Pokrov.  In 1994 the facility was completely rebuilt, but stuck to the original Soviet philosophy that criminals can and must be “rehabilitated” via honest labor.  Recall the famous Soviet movie “Ivan Vasilievich Changes His Profession” [yalensis:  I’ve seen that film, and it’s pretty funny!], the scene where actress Natalia Krachkovskaya removes her wig and utters the winged phrase:  “They will cure you and they will cure me?”  Here is how it works:  The 790 inmates are organized into 10 “squadrons” (отряд); and according to the Soviet philosophy and methodology of rehabilitation, each squadron is treated as a collective, including collective punishment.  If an individual transgresses, the entire collective is punished.  Members of the collective work together and live together.

Of these 10 collectives, two are set aside as “special” squadrons:  One is for the worst of the worst; and another for the most trusted inmates.  In the latter, these trustees live their lives almost like at a Pioneer summer camp:  they don’t even have bars on the windows.

It is not very likely that Navalny will be put in the “Trustee” squadron with the soft conditions.  For the reason that he has been deemed a “flight risk”, and not surprisingly, given his jaunting off to Germany when he was supposed to be on probation for a previous white-collar crime.  Navalny, who sometimes has the mind and bearing of an adolescent, also did a dumb thing while he was sitting in the detainment cell awaiting his transfer to the Colony:  He kept posting on social media and cracked some dumb jokes about making a shiv out of a spoon.  Colony Directors don’t have a sense of humor and don’t appreciate that sort of joke; on the contrary, they will deem Navalny possibly dangerous in that regard, even though he has no history of violence.  With or without shivs. 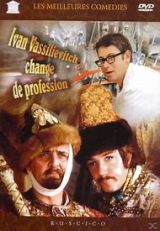 On the other hand, Navalny will have multiple opportunities to redeem himself, in the eyes of the Colony authorities; and even to actually “cure” himself, as Ivan Vasilievich did; or rehabilitate himself; through the good old-fashioned (Soviet) method of productive and socially-useful labor.  He will have opportunities to be trained in an honest industrial profession as a cutter, a turner, or carpenter.  He could also learn to become a tailor and sew clothing; or he could make wooden desks for schools.  Or he could learn to manufacture details for various devices which are actually used in the Vladimir Electro-Motor factory.

Navalny could enter a song competition.

Several prisoners in the colony have discovered hidden talents as ikon painters, or they carve beautiful toys for children.  Inmates also have the opportunity to engage in charity actions to help blind children, for example, creating “tactile toys” and the like.  According to Colony officials, the labor force is at 100%, in other words, EVERYBODY has a job!  Arbeit macht frei.  Everybody must work.  And that’s what it’s all about.  And this isn’t make-work either:  The prisoners provide quality labor and services which are used in the Oblast and valued at a worth of 400 million rubles.

Colony inmates have the right to pursue a middle or higher education curriculum via distance learning.  It’s not free though, they have to pay for it.  At the end they receive a degree or certification in their chosen specialty. 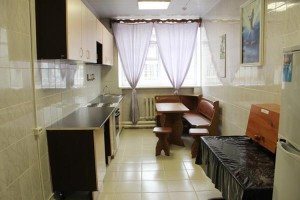 Conjugal visits take place in a room like this one.

Prisoners also have the right for visitation with relatives; it’s usually just a short visit with chatting through a window; but at some point, depending on the course of the pandemic, Navalny might even be able to enjoy conjugal visits with his wife, Julia, in a special 3-storey building with little hotel rooms built for that humanitarian purpose.

The Colony also has a library, it goes without saying.  And terminals where inmates can get expert legal advice.

And in addition to all of that, there is a little Orthodox chapel where prisoners can repent of their sins and find God, if they wish to.  Dostoevsky would approve.

Like Loading...
This entry was posted in Navalniana, True Crime and tagged Alexei Navalny. Bookmark the permalink.