Where we left off in this thrilling war-time story, as related by Military Historian Alexander Zdanovich:  SMERSH assisted by motorcycle soldiers of the Red Army First Ukrainian Front, has just arrested General Andrei Vlasov, right from under the nose of the Americans.  The traitor is now on his way to the Lubyanka for an extended interrogation.

Zdanovich:  “The first series of interrogations were led by Viktor Abakumov himself, the head of SMERSH.”

Quick sidebar on Abakumov, a major figure in this period of Soviet history: 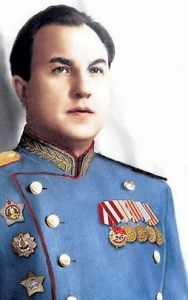 Born in 1908 in Moscow to a poor working-class family.  Only had 4 years of schooling as a child.  From 1921-23 served as a volunteer in a Communist militia in Moscow.  In later 1920’s returned to life as an ordinary worker in various factories.  Joined the Komsomol in 1927 and the Communist Party in 1930.  Starting in 1932 joined the GPU-NKVD with an expertise in economic issues, due to his experience in the packing industry.

Was punished a couple of times by the Party, once for not wanting to take classes and reduce his own illiteracy; another time for a sex scandal.  (He was known as a womanizer.)  By 1936 was back in favor and working as a Junior Lieutenant in the GPU.

Started specializing in military counter-intelligence.  By 1938 was operating at the federal (USSR) level in State Security organs.  With Beria’s promotion in 1938 to Peoples Commissar for Internal Affairs, Abakumov was sent to head the NKVD in the Rostov Oblast.  In 1943, when the NKVD went through a major reorganization, Abakumov was given a big promotion to the head of SMERSH.  According to his rival V.N. Merkulov, Abakumov was stupid, but knew how to play office politics, and how to get in tight with Stalin and Beria.  However, others say that Abakumov was a highly effective leader of SMERSH, and this was his ticket to further promotions.

In 1946 Abakumov received the ultimate promotion to Minister of State Security, replacing his office rival Merkulov.  Abakumov distinguished himself, in the late-Stalin years, with prosecuting the “Leningrad Case” and the “Jewish Doctors Case”.  But Stalin felt that Abakumov was not fabricating evidence fast enough, or well enough, to please the Great Leader.

Abakumov’s fall from grace began in 1951 when he was arrested and charged with treason.  Stalin had started to listen to the gossiping lies of Abakumov’s enemies.  They convinced Stalin that Abakumov was a traitor and was plotting to assassinate him (=Stalin).  Most likely Abakumov was innocent, and these charges against him were fabricated.  According to some witnesses, Abakumov was tortured mercilessly, to the point that he became a cripple.  But he was a real man, he never broke, he denied all the charges against him, even when locked up in a freezer for three months. Thanks to his Spartan stoicism, all the others accused of participating in this plot, whose lives depended on Abakumov not breaking, had to be released.

Abakumov was shot on December 19, 1954, never having admitted any guilt.  To this day he has not been rehabilitated by either the Party or the Russian government.  The current Russian government obviously wants nothing to do with him, as they consider him a Stalin henchperson guilty of many crimes, even if not necessarily the ones he was executed for.

So, this is the man, Abakumov, who is now personally interrogating General Vlasov in the Lubyanka.  This must have been Vlasov’s worst nightmare come true:  Like False Dmitry before him, Vlasov thought he would become the ruler of Russia under benevolent Nazi oversight.  Instead he is sitting in a cage with Stalin’s slab-faced goon looming over him menacingly.

Vlasov and his friends are left hanging… 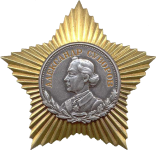 while his captors get Order of Suvorov, Second Class

Zdanovich:  “The end result is everything that we expected.  All of them — Vlasov, Bunyachenko, and also members of the Russian Party leadership, Trukhin, Malyshkin, Zhilenkov, Meandrov, Zakutny and others — by sentence of the court in the summer of 1946, were sent to the scaffold.

“But here is the interesting thing:  Namely how those who took part in this operation, were rewarded.  Five men — Captain Yakushov, Major Vinogradov, Senior Lieutenant Ignashkin, Colonel Mishchenko and the Commander of the 25th Tank Corpus Major-General Fominykh — were rewarded with the Order of Suvorov Second Class, by decree of the Presidium of the Supreme Soviet of the USSR.  The formulation was:  For the successful completion of a special mission of the Front command.  The text of the decree was published in the main Soviet newspapers. 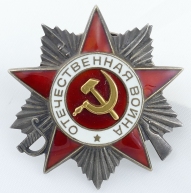 Kuchinsky got to wear some bling on his prison overalls.

“Just think about this for one second.  The Order of Suvorov Second Class, according to the rules, was handed out for successful completion of serious military operations, to Commanders of Corpuses, Divisions and Brigades, or to their deputies and heads of HQ.  Not even all Generals would receive such a reward.  And here you see even a Senior Lieutenant getting one.  An amazing fact.

“But that’s not all.  Military counter-intelligence somehow convinced the leadership that even the men who merely assisted in the capture of Vlasov, should also receive medals.  And therefore, by the same decree, Kuchinsky was awarded with the Order of the Patriotic War First Class; and his driver Dovgas and Vlasov’s driver Komzolov got the Order of the Patriotic War Second Class.”

According to Zdanovich, as far as is known, Kuchinsky, Dovgas and Komzolov [even though they were actually members of Vlasov’s army] got to keep these medals and never had them taken away, even when they were serving out their terms in prison.

Next:  Why the Vlasov operation is considered one of the most successful ever, of Soviet counter-intelligence.

Like Loading...
This entry was posted in Military and War, Russian History and tagged Andrei Vlasov, Viktor Abakumov. Bookmark the permalink.