Today, on a lazy Quarantine Sunday, I have this short piece from Odessa Online [a pro-government, pro-fascist newspaper], concerning a street-altercation in Odessa, Ukraine.  With notable slap-dashiness of a fascist press, the reporter does not even bother to specify the time and date of the incident, but one might assume it happened yesterday (maybe March 28?)

The incident was reported to the newspaper by “activist” (=Ukrainian Nationalist) Demyan Ganul.  Ganul is one of these little cowardly Nazi snitches (in Russian they are called stukachi — “stool pigeons”) who patrol the streets of Odessa trying to find dissidents that they can turn in to the authorities.  Just being cowards and snitches, revelling in their own impunity whilst serving a totalitarian regime, these Nazi bullies portray themselves as heroes who maintain public order. 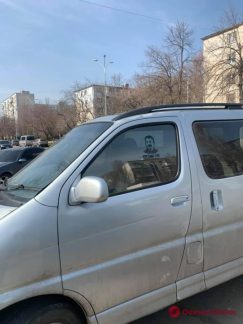 In fascist Ukraine, it’s a crime to like Stalin!

So, Ganul, while out patrolling with a “friend”, while also apparently packing heat, noticed this guy’s car that had a picture of Stalin taped to the window.  Ganul asked the guy to remove the portrait, and the guy refused.  Ganul, being loathesome rat-fink that he is, immediately called the cops to lodge a complaint.  Ganul:  “While we were waiting for the police to arrive, around 15 Titushki came up to show their support for the driver.  They made several attempts to attack us.  In the second case, even right in front of the police.  There were 15 of them, and only two of us, therefore I had no choice except to shoot into the air.  After which, the police were able to subdue them [with tear gas].”

The pro-Stalin car owner was arrested.  He turned out to be a 45-year-old native of Odessa.  He has been charged under Article 436, Part 1 of the penal code which forbids display of “totalitarian” symbolica.  On paper, this includes both Communist and Nazi symbolica, but everybody knows they only apply this law to Commie symbols, while Nazis are allowed to cavort through the streets like a Hitlerite Mardi Gras.  The unnamed owner of this car may face up to 5 years in jail under these grossly unfair laws, not to mention confiscation of his property. 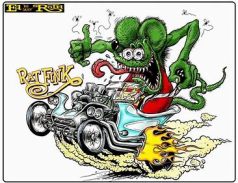 Anyhow, the irony also is not lost on most people, that the banning of certain symbols is not only an attack against free speech, but is itself a manifestation of totalitarianism.  In this case, the totalitarianism of a fascist government.

The hopeful thing is that 15 “Titushki” rose to the challenge and dared to say “NO!” to the Nazi thugs.  Where there are 15 today, there will be 1500 tomorrow.

In fact, very few people who bother to follow the Ukrainian situation, are in doubt that the nasty little rat-finks like Demyan Ganul, are only temporarily in the driver’s seat.  Eventually things will change, and then they will be the ones whining, just like their grandpapas before them, that they were “only following orders” – LOL!

Like Loading...
This entry was posted in Breaking News and tagged de-Communization laws, Demyan Ganul. Bookmark the permalink.