Continuing my translation/summary of this piece by Dmitry Bavyrin.  Where we left off:  The Polish government, having previously refused to sign a military pact with the Soviet Union (which might have saved them), instead fled to London, leaving the Polish people at the mercy of the Nazis.  The Nazis marched eastward to a certain point; the Soviet army marched westward to the agreed delimeter, in the process acquiring some half a million Polish soldiers (and also police and some other service-type men ) as booty and spoils of war.  What, oh what, to do with all these Polacks?

It was standard practice in the (rather grim) Soviet practice of that time to categorize all people according to their ideological characteristics.  “Anti-Soviet” elements as well as class enemies, were not welcome.  Poles were a particular problem, seeing as how they suck in anti-Russian and anti-Soviet attitudes with their mother’s milk.  The Soviet leadership feared that these soldiers (and other trained men), if allowed to run loose, could turn into a “Fifth Column”; all the more so as the Poles were not in Russia of their own free will.  These displaced persons were essentially POW’s, in a way, even though the Soviet Union was not at war with Poland.  Possibly the Soviet leadership was also guided by the spirit of revenge.  Revenge for their shameful defeat (at the hands of the Polish army) in the 1920’s, and the way the Poles dealt with their Red Army prisoners.

In other words, the chances that these 500,000 some Poles would simply be given a pat on the back and allowed to pursue their lives in freedom, was very small.  This was 1939, the Soviet Union was still in the grips of “The Great Terror”, Stalin and his henchmen spared nobody, not even their own.  And yet, miraculously, the majority of these displaced Poles did indeed survive.  They were simply let go on their own recognizance.  [yalensis:  on a personal note, one of my own ancestors, on one of the sides of my family, was one such Polish citizen; he not only survived this culling, but even the whole war, which is one of the reasons I am here!]

Therefore, doing the numbers, of the 500K Polacks inherited by the Soviet Union, a “mere” 130,000 were placed into NKVD camps for further processing.  Of these 130K men, around 40,000 were handed over to the Nazis.  Another 15 to 22 thousand of them are considered to have been victims of the Katyń massacre.  The word Katyń being used loosly, since the actual number of men shot in the Katyń forest was “only” 4,421.  The rest of the “Katyń” guys being shot in NKVD camps. 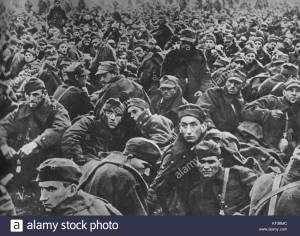 Polish prisoners milling around, in 1939.

These 15 to 22 thousand Poles were considered, by the Soviet leadership, to be the most unregenerate and reactionary Poles even imaginable on the face of this planet.  Completely irredeemable and highly shootable.

Dear Readers, I just calculated some numbers, if there are mathematicians out there, please correct any mistake that I made:  Assuming the upper limit of 22,000 Poles executed in Katyń or one of the NKVD camps: I calculate that if you were one of these 500,000 Poles who ended up in Soviet custody, then you had a 4.4% chance of getting shot!  Put another way, you had a 95.6% chance of surviving, which is not bad odds, when you think about it!

De-classified war documents indicate that it was our old friend, Lavrenty Beria, who proposed the most logical “solution” for dealing with these most “reactionary” elements of the Polish prisoners, these guys included officers, government officials and landowners.  Beria suggested his idea to the Politburo, which approved.  Assigning the bloody deed to be performed by three men, including Beria and Beria’s henchperson Vsevolod Merkulov. Given the fact that these doomed Poles were not Soviet citizens, but in fact Polish citizens, there was a risk of international scandal.  What, oh what, to do?

Born in 1895, in Azerbaijan, Merkulov was of aristocratic roots:  Born in the family of landowners, his father a Captain in the Tsarist army, his mom was a Gruzian of actual noble (like, princess) birth.  Merkulov finished middle school in Tbilisi, Gruzia, in 1913; then continued his studies in Math and Physics at the St. Petersburg University.  Throughout his life, Merkulov was entranced by literature, he wrote his own stories and plays; and even got some published. 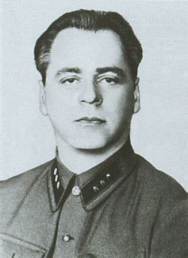 Merkulov: “Why don’t we just shoot them?”

In October, 1916, Merkulov was drafted into the army for WWI.  He managed to get through the war as a Junker while continuing his studies, and never had to participate in an actual battle.  He was demobilized in 1918 and returned to his relatives in Tbilisi.  He got married later that year and proceeded to live a normal life.

Until he decided to enlist in the Cheka, which was some time in 1921.  He served for a few years in the Gruzian Cheka, then joined the Party in 1925.  However, there was some kind of kerfuffle, and they refused to give him a Party ticket.  [In other words, he could be a member of the Party, but not a card-carrying member.]  Then Beria stepped in and fixed the situation for him.  In 1927 they finally gave Merkulov his Party card, and back-dated it to 1925 to make it seem like he had more seniority.  After that, Merkulov just rose through the ranks seamlessly, and did a lot of things that Beria needed to be done, in Gruzia and Ajaria, and places like that.  By 1937 Merkulov had climbed the ladder of Office Politics all the way to the Politburo of the Gruzian Communist Party.

In September of 1938 Beria brought his protege to Moscow, where he became Beria’s right-hand man and major henchperson.  As Beria’s star rose, so did Merkulov’s.  By 1939 he had even become a member of the Central Committee of the Soviet Communist Party.  This is around the time of these Katyń events, and we shall see that Merkulov found a way to deal with the “Shootables” among the Polish prisoners. And then later investigated his own crime!

Peering ahead a bit:  According to his wiki, Merkulov participated in the delegation, headed by Molotov, which arrived in Berlin; and Merkulov actually got to meet Hitler!

During the war, Merkulov continued to function as a major leader of the NKVD and continued to serve as Beria’s #1.  In 1945 he was awarded the title of “General of the Army”.  This was the apex of Merkulov’s rise, and after that began the decline.  Within a year (1946) his enemies, led by Abakumov, had succeeded in undermining him; he was removed from his post as Minister of Defense.  Nonetheless, Merkulov survived the late-Stalin purges and was given odd jobs here and there, for example he was put in charge of Soviet assets abroad.  It was only after Stalin’s death in 1953 that the Postman came knocking (twice) for Merkulov.  He was arrested on 18 September 1953.  A couple of months later, 23 December 1953, Merkulov was put to death, along with with his mentor, Beria.  And this story shows that Beria and Merkulov were actually good friends, and loyal to one another, right up until Death do them part.

Like Loading...
This entry was posted in Russian History and tagged Katyn, Vsevolod Merkulov. Bookmark the permalink.