Yesterday (Monday March 2) was the start of Eastern Orthodox Lent.  Which, in Russian, is called “Velikiy Post” (=”the Great Fasting”).  The word post (=”fasting”) is common to most Slavic languages, with a reconstructed Proto-Slavic form *postъ.  But father back than that, nobody seems to have an etymology; nor cognates in other Indo-European languages, etc., so it’s a bit of a mystery.  If there were such an ancient Indo-European word, it would look something like *postus (and has nothing to do with the English word “post”, by the way, as in planting a post).

The Germanic languages have their various words, e.g., English “lent” which have a clear etymology meaning “springtime”, or the “lengthening of days”, etc.

Eastern churches start Lent on the Monday of the 7th week before Easter, and end it on the Friday 9 days before Easter.  I found this link, which explains it all.  Yesterday (March 2) was called “Clean Monday”. This is the time for people to start fasting and cleansing their systems of all the toxins.  During the next seven weeks or so, Observant Orthodox Christians are not supposed to eat anything with red blood in it, i.e., meat, poultry or game.  Nor the by-products of those animals, such as milk, cheese and eggs.  People are also not supposed to eat fish or seafood that has a backbone.  Which actually doesn’t leave much to eat, in the way of protein.  Even olive oil and wine is restricted, which is particularly hard for Greek people to endure.

On the other hand, many delicious products can be consumed, including:  Stuffed tomatoes; stuffed grape leaves; fried zucchini; etc.  For protein, apparently you are allowed to eat shrimps and mussels, these mussels in rice actually look delicious.  You can be creative and get all the vitamins and protein your body needs, if you are really serious about it.

But how serious are the Russian people?  In this day and age when the Russian government is all about cramming religion down peoples throats.  I’m glad you asked that question, because I have this piece by reporter Dmitry Zubarev, who analyzes a recent opinion poll taken by the Russian sociological institute called ВЦИОМ-Спутник (VTSIOM Sputnik). The poll was conducted on 21 February and included a sample of 1,600 Russian adults over the age of 18.  The poll was conducted via telephone, both landlines and cellphones.  The maximum margin of error with a confidence level of 95% does not exceed 2.5%.

Every 10th Russian (10%) declares that he or she will observe Orthodox Lent this year.  69% said they most definitely will not observe Lent. 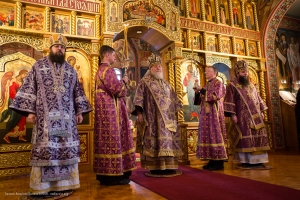 Must look fashionable when fasting…

When asked what psychological associations the word “Lent” invokes, 22% stated that it was associated, most of all, with the notion of restricting food intake.  19% said it was associated with religion; 14% with self-denial and the absence of sinning; 10% with purification.  Only 6% said they experienced positive associations with the word.  55% are familiar with the types of limitations that are expected of the observant; and 43% had no clue what was expected of them.

Of those questioned, 20% consider that observance of Lent morally cleanses a person, 13% say it gives a person will and discipline; 12% say it cleanses the organism; and 35% had no clue what it does.

6 Responses to Opinion Poll: How many Russians Observe Lent?