The Current State of Russian Agriculture – Part I

Today I have this piece by reporter Mikhail Kuvyrko.  The results, the facts and figures are in for the year 2019 in Russian agriculture.  The results are unexpected yet unambiguous, according to Kuvyrko.  Here is the lede:  On the one hand, we have a series of bankruptcies involving regional producers.  On the other hand, record harvests and consolidations (of the bigger producers).  What the heck is going on, in the Russian Agrobusiness Complex?

The data for calendar 2019 has flowed in via the Ministry of Agriculture.  The agiculture sector grew by 2% as compared to 2018.  Deputy Minister of Agriculture Elena Fastova participated last month in a conference called “Agro Holdings of Russia 2019”, at which she reported that the agricultural output, taken as a whole, was expected to exceed the 2018 indicators by 4%, having achieved a total value of around 3 trillion rubles.  Of which the tax revenue to the government will comprise around 378 billion rubles (taxed at a rate of 21%).  And a profit rate (рентабельность) of 14.6%, taking into account government subsidies to the agro sector.  By comparison, 2018 delivered only 12% profit rate.

Fastova, by the way, has a somewhat unusual biography, as she is not an agronomist by training.  Born in 1970, she is 50 years old but looks much younger, at least according to her photograph.  She was born in the Bryansk region of Russia, but moved to Moscow early on to start her education and career.  Her education was a technical one, involving steel and alloys (graduated 1992).  In the 1990’s she made her living in various commercial companies, including as a bookkeeper.  (Which is rather typical for the Russian ’90’s, in which even very educated people were scrambling to survive.)

In 2001 Elena returned to school for a higher technical degree, this time in an aviation institute. Meanwhile, she continued to work as a Consultant and made it into the Ministry of Agriculture, at first as a bookkeeper (accountant), then worked her way up to Deputy Ministry, her current position.

2019 was a particularly successful year for harvests.  The weight of the entire grain harvest is estimated at 121 million tons.  This is the second best result in the whole history of Russia, second only to the year 2017 (130 million tons).  Forecasters had predicted a lower harvest due to a heat wave (in the middle of the year) in the grain-producing regions.  Fortunately, the heat did not do as much damage as expected. 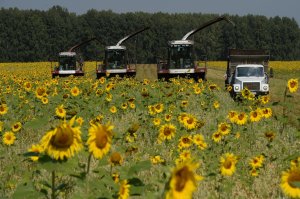 Sunflowers: Hands up and don’t make any sudden moves!

Records were exceeded in indicators other than just the grain harvest.  For example, the sunflower harvest (after processing) comprised 14.8 million tons; as compared to 12.8 million tons in the prior year.

Agricultural exporters saw much to make them go “Huzzah!”  Although not as great as 2018 ($25.8 billion dollars), the number was something like $25 billion, which was exceeded the Plan. (Plan called for $24 billion.)

So, this is the good news for Russia!  But what about the bad news?

Like Loading...
This entry was posted in Economics and tagged Elena Fastova, Russian agriculture. Bookmark the permalink.

4 Responses to The Current State of Russian Agriculture – Part I