Liquidation of Illiteracy In Soviet Russia

Today I have this historical piece from Argumenty I Fakty (aif.ru), by author Konstantin Kudryashov.  The title is:

“We are not slaves, slaves not We!” – Why the Liquidation of Illiteracy Dragged Along

Commenters to the piece have pointed out that Kudryashov’s ideological slant here appears to be a denigration of the Lenin “Literacy Campaign” and also a snide contempt for the early Soviet government.  My Spidey-Sense (which is not necessarily calibrated perfectly) senses also a possible pro-Stalin slant:  That the battle against illiteracy in Soviet Russia only really succeeded under Stalin’s leadership with the completion of the first Five-Year Plan.  The author doesn’t come out and say that per se, it’s just an intimation.  But anyhow, here is what the author actually says:

The very first words of this document, signed by Vladimir Lenin, unambiguously lay out the motivations of the new government, thus removing any cause to speculate as to why the Bolsheviks, in the heat of the Civil War, needed to undertake such a project as the liquidation of illiteracy.  Here are the words:

“For the purposes of offering the entire population of the Republic the possibility of consciously participating in the political life of the nation, the Soviet of Peoples Commissars has decreed…”

Russian peasant women attend school, some for the first time.

For sure, that sounds sinister.  Then follows the text of the actual decree.  In addition to schools, the new government set up “Liquidation Posts”, with the Soviet flair for acronyms and abbreviations dubbed “LikPunkty“, where classes in reading, writing and basic math, took place after working hours.  Those who attended were given bonuses and a shorter (by two hours) working day but with full pay, for the period of their study.  Those who refused to  attend the classes were actually threatened with criminal liability and some kind of punishment.  But all of this is beside the point, according to Kudryashov.  The main point being that the government had a completely selfish reason (shock!) for wanting the population to be literate:  So that they could participate in the political life of the nation, as was clearly stated in the decree.

Not knowledge for the sake of knowledge, but a purely ideological reason.  The population must know how to read, in order to read and understand the government’s directives; to follow orders; and, most of all, to be grateful to the new government for what it bestows. 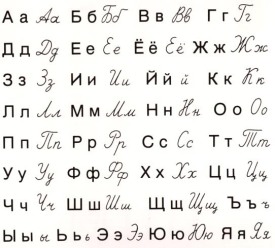 Students needed to learn both printed script and cursive.

The goals placed to each student, and the expectations were fairly modest, this is what it says:  “To be able to read clearly printed and also cursive script, to be able to write short notes, for the necessities of daily life and also in the work place.  To be able to draw whole numbers and fractions, percents, to be familiar with diagrams, and also to learn about the fundamentals of building the Soviet state.”  In a world where just about anybody could be an A student!

Some basic alphabet primers were printed.  In addition to the well known slogan “We are not slaves, slaves not we!” («Мы — не рабы, рабы — не мы»), these primers also contained other ideological formulas which structured reality in the Soviet way, explaining how everything works.  For example, instead of “Dick and Jane”, students would read:  “The Soviets established a 7-hour working day.”  Or:  “We were slaves of Capital.  Now we build the factories ourselves.”  There was also this:  “Among the workers there were many who suffered from tuberculosis.  The Soviets gave these workers free medical care.”  Besides this ideological baggage, the primers also contained what we would today call civic advertising:  “Infants need to be innoculated against smallpox.”

Failure of the Literacy Campaign

At first it seemed like the campaign was success.  There was so much enthusiasm for the project.  Even foreign guests were impressed:  English writer Herbert Wells (H.G. Wells) visited the Soviet Union just a year after this Literacy decree had been published.  He came away convinced that the struggle to bring education and enlightenment to the Soviet masses, was a success.  Wells concluded that the number of schools in the Russian cities had risen significantly, and the quality of the instruction was significantly better, than in Tsarist times. 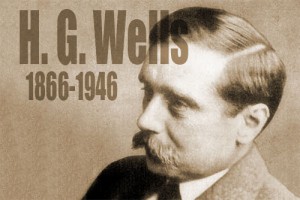 However, there were indications that the situation on the ground was not so rosy.  Despite the harsh measures taken to punish slackers, the ranks of the Literate grew very slowly, and much fewer than was planned for.  For example, the Plan called for 6.5 million people to gain literacy by 1920; instead, the actual number was only 3 million.  And this proportion remained a constant:  For the next few years, the actual number was always about half of the projected number.  Even worse, there was some retrograde:  It was found that up to 40% of those adults who had learned to read in the LikPunkty, forget everything they learned within 3-4 years, and had to return for a refresher.

I think we can all guess the reason why, because we’ve all been there:  You spend a week in training (at your employer’s expense) and learn something new, you’re all fired up about it, then you go home, you return to your old ways, back to your little silo; and if you don’t practice what you learned, then it just ebbs away.  Use it or lose it — is the standard device.

An agitational poster of the time even explained this phenomenon succintly:  “If you don’t read any books, then you will soon forget how to read!”

“We also have a shortage of maps.”

But the problem was not just one of individual choice.  Like the American beauty queen who explained the ignorance of the American people in regards to geography, by a possible shortage of maps, Kudryashov explains that the Russian people of the time suffered from a shortage of books.  In fact, the library shelves were so empty that Nadezhda Krupskaya (Lenin’s wife) was forced to declare a “Library Crusade” to obtain and supply more books to the local libraries.

But the real reason for the failure of the campaign — and this is the part where Kudryashov completely lets slip his mask and shows his ideological distaste for the Bolsheviks — lay in something else.  In the fact that the Bolsheviks, in his view, failed at everything they attempted:  They failed to change reality, they did not live up to their promises:  In the 12 years that followed the 1917 Revolution, Russia remained a backward, agrarian nation, with only small oases of industrialization.  For the average worker or peasant, literacy was not a vital need, they could get by without it.  Could, and did, as the statistics show.

And then, finally, some signs of success.   Yay, Stalin!  [As one of the commenters points out, this would be around the time when the children, who learned to read and write in the early Soviet school system, before the two lobes of their brain have stitched together in adulthood, have come of age and managed to retain what they had learned in school.  But Kudryashov never mentions this important factor – the difference between adults trying to learn something they should have ideally learned as kids; vs kids learning it at the right time in their mental development!]

Kudryashov assigns the positive change to the industrialization project, and I am sure he is at least partly correct about this.  Industrialization was indeed the key to success in every arena, as every good Bolshevik was well aware.  In an industrial society, everybody needs to be literate.  And ordinary people realized this on this own, without the prompting of a Commissar or government official.

Illiteracy was liquidated at roughly the same time, and in the same tempo, as industrialization itself was accomplished, per Kudryashov.  The first Five-Year Plan was launched in 1928.  By 1939 literacy for the demographic from 16-50 years old approximated to 90%.

And yet, Lenin gets no credit for this, according to the esteemed historian (?)

Like Loading...
This entry was posted in Human Dignity, Russian History and tagged Liquidation of Illiteracy. Bookmark the permalink.