Germany Double Feature, Rammstein Is Back! – Part I

Still on the theme of Germany, I have this piece from the Russian press, with Anton Krylov’s review of the new Rammstein video, “Deutschland”.  You can view the official version of the vid on the Rammstein site here.  The story begins in 16 A.D., Magna Germania, with Romans invading, as Romans are wont to do.

The Roman soldiers encounter some scary stuff, including a bunch of worn-out statues and a laser beam shooting up into the sky.  They encounter a crazy barbarian she-wolf type of person, a beautiful Negress (portrayed by German-born actress and model Ruby Commey).  One of the (semi-controversial) artistic choices made by Rammstein was to have “Germany” portrayed throughout history in the guise of this 28-year-old African-German woman.  On my first viewing of the vid, I thought this was just a gimmick, like that movie about the Trojan War, in which Achilles was a black guy with an English accent.  After a couple of repeated viewings (of the Rammstein video, that is), I really got into it, and into her.

As this critic noted, the band’s lyrics are something less than patriotic (they have a troubled relationship with their homeland), hence their choice of Ruby to personify Germany is probably the least of their issues:

As you may have noticed, the video also includes a black woman who is a Nazi officer. This is just one of several science fiction elements in the video (like an abundance of lasers, because Rammstein frickin’ love lasers), but the woman appears repeatedly, and seems to be intended as the personification of Germany itself. She leads the Crusade; during the Plague, the German clergy literally eat from the fat of her land while prisoners struggle beneath her; she’s royalty; she’s laughing; she’s weeping. On several occasions, the clip cuts to her face just as the band shouts “DEUTSCHLAND!”, punctuating this concept.

Anyhow, after we first meet Ruby as a barbarian in the forest (holding a severed head in her hands, as is her wont), next we see the boys in the band in a series of guises, including astronauts.  (Which is true sci-fi, because I don’t think Germany even has any astronauts.)  Ruby is always with the Rammstein boys, and she is always carrying a severed head.  She leads the Crusades, while frickin’ lasers shoot up into the sky.  She cheers on a violent boxing match.  She is an officer with the Stasi in East Germany.  (Rammstein always features East German heraldry in their vids:  the hammer and compass in a ring of rye sheaves, symbolizing industry, science and agriculture.)  If you look closer into that East German office, you will notice a Soviet astronaut alongside the German officers, he carries his CCCP helmet in his hand, like a severed head.  This video has so much symbolism packed into such a short time, that even Professor Robert Langdon would never be able to decipher it all!

The grossest scene, probably, is the one set during the Plague, where Ruby lies struggling on a table, while the German clergy slice off chunks of her flesh to feast on.  Yowgh!  I believe this is what the Japanese call “Cruel Cuisine”. 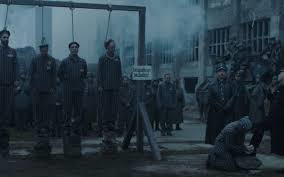 The Rammstein boys prove that they are well hung.

Next the astronaut again, in a sort of “Raiders of the Lost Ark” type of scenario.  And some important writing on the wall — but it flashes by so fast I can’t read it…

Then the boys getting beaten up by cops in the Roaring 20’s.  And next thing you know, our boys are inmates in a Nazi concentration camp.  They are about to be hanged, just as the first Nazi V-2 rocket is being launched.   How thrilling!

These few seconds of the clip are, of course, the main “controversy” of the video, with the “usual suspects” piling on to condemn this batshit-crazy work of art for its alleged “anti-Semitism”.  Yeah, it’s anti-Semitic to mention Hitler’s genocide of European Jews.  How about anti-Semitic to NOT mention it, you boneheaded hypocrites!  These are probably the same philistines and cultural vampires who criticized the Burkovsky-Navka ice-dancing program, back in 2016, which I reviewed in my Holocaust On Ice post from that era.

Anyhow, Ruby the Gestapo officer watches approvingly while the boys are hanged; but then there are a bunch of other images and symbolism, including book-burning and an obvious allegory matching Nazism with Catholicism, and then Ruby tongue-kissing Rammstein’s severed head, and next thing you know, she is pregnant, and astronauts are caressing her belly; and then the boys are gangsters again; and then Ruby is giving birth — to puppies!  Cute puppies, aw!

“Am I not also Germany?”

Then we’re back to the Nazi concentration camp, only the inmates have taken over, armed themselves, and start killing Nazis.  Yay, it’s payback time!  More stuff happens, and then Ruby ascends like an Angel while the boys wear hazmat suits and carry puppies in their arms.  Some critics believe that the puppies symbolize the birth of a New Germany.  Maybe…  But sometimes a puppy is just a puppy, as Doktor Freud once said.

And then that final shot, as a coffin (carrying Ruby?) goes into orbit around the Earth while a frickin’ laser beam shoots up into the sky, thus completing the circle.

Well, there is obviously way too much symbolism here to decode; and I hope that readers realize, these are just my own scattered thoughts, I didn’t even get to Krylov’s review yet!  That will have to wait until tomorrow’s post..

In conclusion, I just want to express my own opinion here, which is this:  Rammstein are geniuses, obviously, and their vid, albeit crazy shit, is a true work of art.  I just think they are being too hard on their native land.  For sure, Germany gave rise to Hitler, but his reign was just a flash in the pan, when you look at the larger picture.  And for sure, Germany has paid the price and remains, this day, under American military occupation.  For sure, they lost their sovereignty and have to dance to Uncle Sam’s tune.  But that too shall pass.  After all, this is the nation that gave birth to great artists like Albrecht Dürer; great writers like Goethe; great musicians like Beethoven, Mozart, Wagner.  (And Rammstein!)  And they ain’t no dogs!

Like Loading...
This entry was posted in Art Criticism, Popular Culture and tagged Rammstein, Ruby Commey. Bookmark the permalink.