This Autocephaly story — which is rapidly growing more legs than a millipede on stem-cell regeneration therapy — came as a slap in the face to the Russian government!  A slap such was never before was seen, since that fateful day when the Mighty Knight Ruslan boxed the ears of the Big Giant Head out on the steppes of the Donbass.

Well, maybe the Russian government needed such a slap in the face, to wake it up to the machinations of its enemies.  Or maybe the Russian government is simply playing by the rules.  One rule is that normal (=secular) governments do not get involved in affairs of religion, as Sergei Lavrov patiently explained yesterday.  But what is a playing-by-the-rules government to do when its enemy has egregiously crossed more red lines than a […] than a millipede who crosses a lot of red lines[?]

NATO wants to get its hands on…

Now, that last one is quite curious, from a Kremlinological point of view.  Recall that Ivanov used to be Putin’s Chief of Staff, then Putin fired him, then brought him back in this other role.  Sergei Ivanov’s official title is “Special Representative of the President on issues of Environmental Activities, Environment and Transport”.  So, inquiring minds wonder, why did President Putin need him in this meeting to discuss the Orthodox religion and the Ukrainian conflict?  One possibility:  Ivanov, despite his title, is simply a well-trusted guy with solid opinions.  Another possibility, and this is purely speculation on my part, is that something might be afoot that would impact the environment.  For example, if the Banderite army were to attack the Kiev-Pecherskaya Lavra, and a battle were to erupt within, on the order of what happened at the Donetsk airport, then the air might be filled with the dust of centuries-old dead mummies…  Again, this is pure speculation on my part, I don’t mean to start a panic about Mummy Apocalypses, or anything like that….

But the big take-away here is that the Kremlin is really (finally!) taking this story seriously and seeing it for what it is:  A very well-played gambit aimed directly at Russia’s gut.  According to this other piece by Alexei Lasnov, Sergei Lavrov finally figured out what was going on and emitted the following utterance:  “The Ukrainian Orthodox Church of the Moscow Patriarchate is coming out against these provocations concocted by Bartholomew in Constantinople, with the direct public support of Washington D.C. [bingo!]…. And as concerns these so-called religious issues, it is forbidden by law in Russia, as well as in the Ukraine, and indeed in any normal government, for the government to interfere in the religious sector.  But when we see the Special Representative of the American Representative for Religious Affairs, directly welcoming the decision of Patriarch Bartholomew; when we see Volker, who is supposed to be representing the U.S. in the regulation of the Ukrainian conflict according to the Minsk agreements, declaring what he just declared about [this religious issue], then all we can say is:  The hat on the thief’s head is burning brightly!”

No shit, Lavrov.  What exactly are you trying to say?  That the American government is behind this devious plot to reverse still another one of the various accomplishments of Peter the Great?

Recall that all this Sturm and Drang started on Thursday, when Patriarch Bartholomew “removed the anathemas” from Kiev Schismatics Filaret and Macarius.  Keep this in mind:  Doctors warn that “removing anathemas” is a procedure best left to seasoned professionals.  Side effects can include (1) Synod of the Sinuses, (2) WalpurgisNacht, (3) Baba Yaga, and (4) Coyote Flaco.  Please consult a licensed specialist before undertaking this course of therapy.

But What About Those Mummies?

Please contain yourself, we’ll get to the mummies later.  For now let us move on to this piece from RIA.  The writer is Anton Skripunov.

Patriarch Bartholomew of Constantinople has made a bold and egregious play to seize control of the Ukrainian Orthodox flock, taking those innocent sheeps away from Patriarch Kirill of Moscow.  The Ukrainian government rapturously welcomed this move, of course.

And by the way, yesterday I didn’t know who this Father Macarius was, but now I know, and I shall share this knowledge with you:  Macarius Maletich is the “other” former Schismatic whom Bart pardoned, along with Filaret.  Both men had their anathemas removed on Thursday.  Apparently Filaret used to be an actual priest before he was ex-communicated.  Whereas Macarius was a “self-anointed” (what Russians called a “pretender”) bishop of his own Autocephalic church.  Got that?  I googled Macarius to see if I could find a picture of him; instead I found this copy of the Congressional Record from 2016.  In which Macarius is being introduced to the monkeys of the U.S. Congress as “Macarius (Maletich) — Primate of the Ukrainian Autocephalous Orthodox Church”… this, in the context of Congress allocating more $$$ to the Ukrainian army, including lethal weapons, to bring the Donbass Separatists in line.  To force them to pray to a different God.  Namely, Stepan Bandera!

Here is how this play went down:  Filaret and Macarius wrote an appeal to Bartholomew, requesting that their anathemas be removed.  Ecumenical Patriarch Bartholomew lives in Turkey, a NATO country.  His enemies say that he is an agent of the Turkish Secret Police; but it is more likely that he works for the CIA.  Filaret and his Second Banana, in their official appeal, claimed that there were no actual doctrinal differences between themselves and the “recognized” Orthodox Church.  That it is all just about politics.  Which is a true statement, actually.  It was in 1992, under Ukrainian President Kravchuk and with his support, that Filaret set up his own shop in the Ukrainian capital.  (So, in a way, it was Kravchuk who started this whole thing.)  This was Step #1 in Washington’s plan to split the Ukraine away from Russia, so that they (=NATO) could lay their dirty ape paws on Sebastopol.  But the Russian Patriarchate of the time, even though Yeltsin was still in charge, reacted firmly, removing Filaret’s Bishop title, and soon placing the Anathema on him. 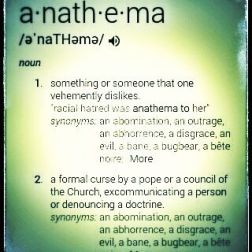 The situation of Macarius is slightly different:  He dates his sect back to 1920, claiming descent from the religious structure that was set up under Petliura.  Since that thing was already declared Schismatic way back then, it just goes without saying that Macarius remains a Schismatic himself, from the POV of the Russian Patriarchate.  Which, by the way, insists that it, and only it, has the right to declare and un-declare Schismatics, no matter that Constantinople should try to horn in on the action.

Patriarch Bartholomew lives in a region of Constantinople (=Istanbul) called “Fanar”.  Hence, it is said that “Fanar decreed…” etc.  In this case, Fanar decreed, not so much that the autocephalic structures themselves are legitimate, as that the priests and their shepherding skills were considered to be kosher.  “Let them come under our roof,” Bart invited.

Father Alexander Volkov, Press Secretary to the Moscow Patriarch, counters:  “These men (=Filaret + Macarius) were judged by the Church, this judgment was accepted by all of world Orthodoxy, including the Constantinople Patriarch.  But now, in order for these men to be hand-shakable for Constantinople, the latter first wipes its hand with a napkin, and then will shake their hands.”