This is Breaking News of the highest order!  Yesterday (Thursday October 11), the Patriarch of Constantinople (almost) recognized the Ukrainian Banderite Church as the legitimate tomos of Ukraine.  (Well, technically, Bartholomew just “Removed the Anathema“, but that’s Step #1.)  For those who are keeping score out there in The Great Game, this marks a geopolitical defeat for Russia, and a win for NATO.  But, as Sophocles used to say, “The game ain’t over until the Fat Lady sings.”  So keep your cool, keep your popcorn on hand, and follow this story, along with me!

I don’t have time here to review the backstory, and the Greek etymologies of words like tomos and Autocephaly, etc., but if you are hungry to learn more, then you can read these former posts in which I explain these concepts and introduce some of the main players, such as Bartholomew, Filaret, etc.  For now though let us rush to THE BREAKING NEWS!!! and I selected this piece by Mikhail Moshkin to dish up the latest developments.  Moshkin’s headline reads:  “Constantinople Recognizes Ukrainian Schismatics According to the Banderite Scheme”. 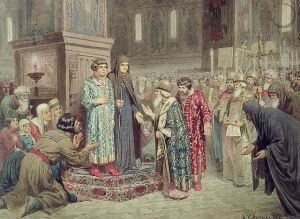 A decade into the Turkish war, Russia captured Azov

Okay, just a little bit of backstory:  In 1686 the Kiev Metropolitan was put under the jurisdiction of the Moscow Patriarchate.  In terms of Office Politics, that would be, like, Kiev is a Manager, and he was put under Director Moscow.  If you glance at this wiki entry, you will see why 1686 was such an important year for Russia.  Peter the Great was Tsar.  Poltava hadn’t happened yet, but Russia had just incorporated Kiev and the Left Bank of the Ukraine into the Russian Empire.  Russia was busy forming alliances with her former enemies, the Habsburg Empire, against Turkey.  Even Poland and Lithuania agreed to recognize the incorporation of the Left Bank Ukraine in return for Russian assistance against the Turks.  All the players in this Great Game were pretty much the same ones we see today (except for the United States), just with ever-changing configurations.  But the key point here is that, in order for Moscow and Kiev to form a more perfect union, the Kievite religious authorities had to lie underneath the Muscovite ones.  Hence, Moscow got a Patriarch, but Kiev only got a Metropolitan.  And that is the way it has been ever since then.  Until yesterday…

Bartholomew: “My bling is better than Kirill’s!”

That is no country for old men. The young
In one another’s arms, birds in the trees,
—Those dying generations—at their song,
The salmon-falls, the mackerel-crowded seas,
Fish, flesh, or fowl, commend all summer long
Whatever is begotten, born, and dies.
Caught in that sensual music all neglect
Monuments of unageing intellect.

Remember, people:  the key player here is Bartholomew of Constantinople.  He is a Patriarch, just like Kirill of Moscow is a Patriarch.  But for some reason, Bartholomew is considered primus inter pares (“the first among equals”).   Now, in the Catholic Church, you always know who the big cheese is:  It’s the Pope.  Nobody disputes his infallibility.  What he says, goes.  In the Orthodox world, inherited from Byzantium, it’s slightly less authoritarian than that.  See, all Patriarchs are created equal, but some are more equal than others.  Which is why Father Bart is called the “Universal” or “Ecumenical” Patriarch.  Now, on the surface, Bart doesn’t look any different from the others:  He has a long white beard, a robe and cap, and likes to show off his bling  (’cause, see, Jesus always favored people who had a lot of jewels and wealth).  Now, apparently there is some kind of loophole within the Orthodox Company Policy Manual, by which Father Bart can, from time to time, seize power and take on more authority almost like a Catholic Pope.  Even though, realistically, his actual church is very tiny and situated within a Muslim country (=Turkey).  Whereas the Russian branch is huge and has millions of followers.  It’s all about some obscure doctrine or loophole from the distant past.

Moshkin interviewed a religious scholar named Maxim Klimenko who attempted to explain the loophole.  Recall that in early Christianity (before the split into West and East), there was a Pope who enjoyed quite a lot of authority.  According to Orthodox dogma, when Rome #1 (in Rome, Italy) fell, and legitimacy passed to Rome #2 (in Constantinople), the Pope in Constantinople inherited the same powers and legitimacy as the Pope used to have when he was in Rome #1.  Got that?  So, technically, he who sits in the seat in Constantinople is actually The Real Pope, along with all the powers, short of infallibility (which was a later invention in the West).

It goes without saying, that Russia does not accept this view of historical legitimacy, since Moscow believes itself to be Rome #3.  Making Constantinople just another failed backwater.  However, as Klimenko concedes, it was out of respect for Rome #2’s former position that the Constantinople Patriarch came to be viewed as a type of Supreme Arbitrator of religious disputes.  “For example, when serious charges were alleged against the Jerusalem Patriarch Irinei, or when there were disputes about the elections held in the Cyprus Church,” then people would turn to Constantinople to arbitrate.  Klimenko concedes that Bartholomew does, in fact, as a matter of tradition, have the right to remove an anathema laid upon a local branch.  In this case, the Ukrainian Schismatic branch.

So, technically, this is what happened:  Constantinople sat for a synod for two days preceding Thursday’s shock announcement.  Despite the nay-saying of William Butler Yeats, Byzantium became Some Country For Old Men during those fateful days.  The participants were all old men wearing long black robes and sporting identical long white beards.  These old men all looked so much alike, that they couldn’t even tell each other apart, and had to wear name tags.  But at the end of the day they made this earth-shattering decision to “Remove the Anathema” from the Ukrainian Schismatics.

Removing The Anathema From The Ukrainian Schismatics

Which means that Schismatic Filaret of Kiev, along with his sidekick, Pretender Macarius [who he?], have had their Anathemas removed, which sounds like a painful medical procedure.  Which means they will be allowed the supreme joy of being accepted into the glorious presence of Bartholomew of Byzantium.  Removal of their Anathemas has restored their Communicative Faculties.  But in what capacity, Klimenko asks?  Surely not as a Patriarch or even Metropolitan?  Shirley not.  Perhaps they will be allowed to live out their lives as non-heretical Monks or Bishops?

Peter is rolling in his grave…

Well, it’s too early to tell, but Ukrainian President Poroshenko has already gone va-Bank, gloating his guts out and declaring that his guy Filaret is The Big Cheese now.  “Who’s the heretic now, Moscow?!”  Recall that Filaret is the blood-thirsty dude who wanted the people of Donbass to shed blood for their “sin” of voting in a referendum.  And now this murderous Banderite will be the head of the Ukrainian Orthodox Church?  The pro-Russians out there in the blogosphere are hoping against hope that “this is just another case of Porky over-reaching himself, in the lead-up to the elections” — but I’m not so sure.  These are the same wishful-thinkers who hoped that Putin had cut a deal with Erdoğan:  Idlib in return for clipping Bartholomew’s wings!  In other words, this could be a serious loss for Russia; and a real coup for the geopolitical “geniuses” of NATO.  And maybe even payback for Turkey, still simmering in resentment for its loss of Azov to Peter the Great!

Like Loading...
This entry was posted in Breaking News, Religion, The Great Game and tagged Filaret, Macarius, Patriarch Bartholomew. Bookmark the permalink.