Continuing my review of the Metropolitan Opera’s production of Rossini’s great opera Semiramide, which I saw this past weekend on the Live in HD.  As my loyal readers and fellow opera buffs know, I like to break down the stories and back-stories and even the back-back-stories.  I am a materialist and rationalist, so I like the stories to be logical, internally consistent, and, heck, just make sense.  Unfortunately, Gaetano Rossi’s libretto, which he wrote for Rossini, has more holes in it than a slice of Swiss cheese.  But don’t blame, poor Gaetano.  It turns out that the source material itself, written by the great Voltaire, is also full of plot holes.  All the more pity, since this is basically a murder mystery! 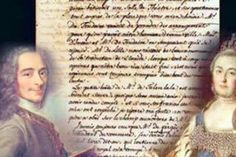 Voltaire and Cathy were pen pals.

I mentioned before that Voltaire was a big fan of so-called “Enlightened Despots” such as the Russian monarch Catherine the Great (reigned 1762-1796).  Voltaire published his play Sémiramis (1749) more than a decade before Catherine ascended the throne of the Romanovs.  Thus, he clearly had an image of what he thought an Enlightened Queen should look like.  So that when Catherine took over the Russian government, Voltaire may have seen her as the embodiment of his political and sexual fantasy.  Back in 2006 the Russian government was able to recover, for the state archives, letters written by Voltaire to Catherine, which had been hidden away in a private archive these past few centuries.

Voltaire’s letters to Cathy were penned during the years 1768-1777.  The French writer and philosopher was apparently a bit of a kreakle in his own land:  He was a critic of his own national monarchy but sucked up like crazy to the Russian Empress, not criticizing her brutal treatment of the Russian serfs (who comprised, oh, something like 90% of the population!), and even supporting her military campaigns against the Turks.  Not only that, but Voltaire had the hots for this “Semiramis of the North”, as he described her; allegedly he had a portrait of Cathy in his bedroom, right in front of his bed.  He may have been sexually attracted to her pale Germanic skin and heaving bosom…

Paul I as a young nipper

Cathy’s ruthlessness — the fact that she overthrew her own husband (Peter III) via military coup and took the throne from him — would not have bothered Voltaire in the slightest, since these events mirrored the plot points in his own play:  Semiramide plots with Assur and the army to off her own husband, King Ninus.  And Semiramide’s excuse is the same as Cathy’s:  Her husband was out to get her, she was just defending herself.  However, if life had mirrored art perfectly, then Cathy’s son Paul I, in the role of Prince Ninia, would have reigned gloriously after his mom’s death.  Well, he did reign, but only for a few years, and not exactly gloriously.

In his play, Voltaire excuses the Queen for her murderous ways, on the grounds that her reign was good for the people of Babylon.  She built the hanging gardens, encouraged the arts and sciences, listened to the wise counsel of the Magis, etc.  This is a point of view, and perhaps even a correct point of view:  The good of the many outweighs the costs of the few, the end justifies the means, you can’t make an omelette without breaking eggs, etc.

For those interested in reading Voltaire’s play but can’t read French, I found this English translation of a bunch of his plays, including Sémiramis.  It’s mostly gibberish, of course.  I was hoping that the original source material might fill in some of the plot holes so that I could lay out a logical back-story.  It did fill in a couple of holes, but not the main one.  Namely, if Assur was alleged to have murdered Semiramide’s child, Prince Ninia, then what happened to the body?  Somebody just informs the Queen that her baby is dead, and she just accepts that without demanding to see the body?  That would be unlike any mother that I have ever heard of.  Oh well, with the assistance of Voltaire, Allons-y and on to the back-story, such as it is….

So, we are in ancient Babylon, also known as the Assyrian Empire.  Urban centers include Babylon and Nineveh.  Tourists are encouraged to see the Hanging Gardens, the Temple of Ba’al and the Tomb of King Ninus.  Whose ghost is alleged to walk the grounds at night, just like Hamlet’s dad.

According to Assyrian mythology, Queen Shammuramat reigned around 810 B.C. as the Empress Regent.  Her name meant “dove” in her native Assyrian language, a member of the Semitic language family, probably related to Akkadian.  Other scholars say that the Semitic root šammu (pronounced shamu) means “red”, and not killer-whale, despite what one may think.  The real Shammy, as her friends called her, just reigned for a couple of years as Regent, until her boy came of age, otherwise the Assyrians would have never accepted a woman on the throne.  The Assyrians were so macho that they made the Spartans look like pussies.  Or so I am told.

But in Voltaire’s story, as followed closely by Rossi/Rossini, Shammy has been on the throne for 15 years!  And her son supposedly died along with hubby, both killed off by Assur.  The baby would have been around 2 or 3 at the time.  See, Shammy was worried that hubby Ninus (from whose name came the ancient city of Nineveh?) was about to kick her out of their bedroom.  Maybe he was seeing somebody else.  So she conspires with Assur to kill hub.  Assur poisons the King.  Voltaire denotes Assur as a “Prince of the Family of Belus” — Belus deriving from the God Ba’al, of course.  This is a very noble family in the kingdom.  The Belus family is so noble that their members are vitually untouchable, even when accused of regicide!