Today I conclude my 4-part (A,B,C,D) treatment of the monograph, “Trotsky In Mexico”, Part I, by Professor William Chase. Again, if you are not sure what this is all about, then please read, first

Not to mention that the prolific Prof penned his original source material in 3 parts!  So, there is lots more to come.  But my plan is to take a break from this fascinating material, and then resume some time in November.

Trotsky checks his text messages while relaxing at home with wife, son, and pooch.

Anyhow, where we left off, the Russian exile, Leon Trotsky, had achieved three remarkable successes in a life which otherwise, in the past decade, had consisted of a series of bitter defeats and setbacks.  It is 1937 and Trotsky has not yet tasted the most bitter pain that any man can experience:  the deaths of both of his sons.  He is still in fighting trim and maintains an optimistic attitude about life.  His recent successes have bolstered his spirit, namely:  (1) achieving a more stable place of exile, in Mexico; (2) building a large-ish political front group in the U.S. while recruiting more cadres for his American faction; and (3) his Not-Guilty verdict in the Dewey Commission findings.  All of this provided Trotsky with more resources and more influence, especially among the American Left.

Flash-forward:  Trotsky has also not yet experienced the second most bitter pain that a political man can endure:  The loss of his supporters.  That was to happen a couple of years later, in 1939, when Shachtman, Burnham, and most of the influential Trotskyist intellectuals abandoned The Leader in a huff over Molotov-Ribbentrop.  And not long after that:  the ice-pick and the final agony.

But no, we are still back in 1937, a relatively happier time.  Trotsky still has his devoted wife, one son, his friends, his dog, his social network, his books, and his main hobby:  Political maneuvering and faction-building.  All of us, both great and small, are biological beings, and no matter what happens, life can feel damned good, provided the serotonin keeps flowing in our veins.

A few months earlier:
According to Professor Chase, Trotsky still strives, like a lemming, to set foot on American soil.  His immediate goal being to testify in person to the Dewey Committee.  (Spoiler alert:  In the end, Dewey had to travel all the way to Mexico to take Trotsky’s deposition.)

Trotsky’s supporters appealed for help to prominent American Liberal-Leftists, including even members of President Roosevelt’s cabinet, such as Secretary of Labor Frances Perkins.   Perkins agreed, in theory, that Trotsky could be permitted onto American soil provided he abstained from activity within the framework of internal American politics.  It is not clear if Perkins meant regular American politics, or if she included the Trotskyite faction-building within the Socialist Party.  Perkins, by the way, went on (1939) to prove her Leftie sympathies innate fairness by refusing to deport Communist Party Longshoreman and Trade Unionist Harry Bridges.  Yes, boys and girls, this was back in the days when dinosaurs roamed the land, and America still had industrial trade unions!

That same summer Trotsky received a lecture invitation from Alexander Heard of the Carolina Political Union.  This organization was organized in 1936 to stimulate political thinking and debate among students on the Chapel Hill campus of the University of North Carolina.  Heard was ecumenical:  He had also invited Earl Browder to give a lecture on campus.  Browder’s lecture was to take place on December 2, 1937.  In his letter of acceptance, Browder noted that he was ready for his close-up:  “Under separate cover I will send you material which you ask for, picture, etc.  At the present we have only some glossy prints, but I will have a mat made and send it on to you.”

Earl Browder: Kept some color glossies in his portfolio

Trotsky rarely passed up a chance to give a lecture, yet was dubious about the Heard invitation.  Mainly because, at that same time, he was pretending to be ill and seeking a medical visa into the U.S.  With both gambits cancelling each other out.  But it was all moot anyhow:  The U.S. State Department huffily informed Heard (when the latter inquired about a visa for Trotsky) that the Marxist revolutionary should not be allowed in, given that his political views have not changed one iota since his last refusal, in 1933.

Secretary of State Cordell Hull reinforced this point when he informed John Dewey (October 1937) that an American visa for Trotsky was out of the question.  (Dewey was still hoping to get Trotsky into the U.S. so that he, Dewey, wouldn’t have to go to Mexico to take his deposition.)  One of the reasons Hull gave Dewey was pure Realpolitik:  Given the escalation of hostilities and Japanese aggression in the Far East, the American government did not want to upset Stalin.  And there are, by the way, American Righties who believe to this day that Cordell Hull was a secret Communist agent working directly for Uncle Joe.  Or, at the very least, surrounded by Useful Stooges of the GPU.  But such outbreaks of neo-McCarthyism are considered mauvais ton, it goes without saying.  Unless the attacks are directed at Russia’s current government, which is anything but Communist!

In the end, like his distant ancestor Moses, Trotsky was never allowed to set foot onto the sacred soil of the Promised Land.  Hence he was never able to commune with those eager young minds from the great state of North Carolina.  It would have been super-funny, though, if, in an alternate universe, Trotsky had arrived at Chapel Hill, by mistake, on the same day that Browder was lecturing.  Now that would have been a blow-out!

No Soup For You

And hence, despite appeals at the highest levels of the Roosevelt administration, the U.S. State Department was unwavering in its refusal to grant Trotsky an entry visa.  More bad news came raining down:  In February 1938, the American Committee for the Defense of Leon Trotsky (ACDLT), disbands.  Thinks its job is over, after the Dewey verdict.  Doesn’t realize it was supposed to continue as a perment Trotskyite front group.  Trotsky was furious, he expected the ACDLT to continue on the fight against Stalinism, which he called “a syphilitic infection of the working-class movement“:

“Now we have to start all over again.  Such is the fate of any political celibate!  In any case, our primary focus and most important task now is to create a (new) committee of defense against Stalinist gangsterism.  What is taking place in Spain is just the beginning.  We need to build cadres of political militias to defend us against these killers.”

The Spanish Civil War, in fact, was one of the major causes of Trotsky’s fall in popularity around this time.  Most progressive forces in Europe and the U.S. supported the People’s Front and Republican government against Franco.  American writers such as Hemingway helped to create mass sympathy for the Republican cause.  While Communist luminaries like Pete Seeger fought in the Lincoln Brigade and wrote awesome songs to bolster the cadres.  Like the old commie jokes goes:  “Franco won all the battles, but our side had the best songs!” 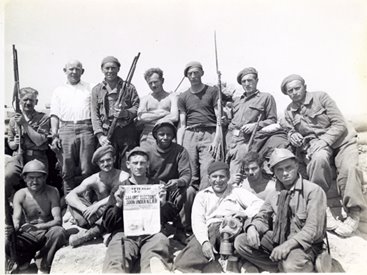 Trotsky’s position on the war was much more nuanced; as mentioned in a previous segment, he supported one of the Catalonia splinter parties and warned the other fighters about trusting the Republican government.  Fearing the same result as had happened a decade earlier in Shanghai.  In Trotsky’s view:  Whenever proletarians do the dirty work for the bourgeoisie and make the mistake of “trusting” the latter, they usually get their asses handed to them after the military victory which they (the proletarian parties) helped to assure.  Instead, applying his patented doctrine of “permanent revolution”, Trotsky called upon the Spanish communists to militarily defeat Franco while preserving their own identity and organizing their own Soviet-style government.  Instead of handing the victory to the bourgeois Republican government. 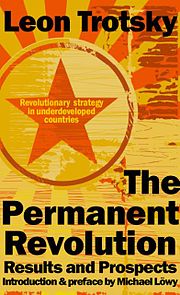 Such nuances are impossible to explain to a mass audience terrified of fascism but unfamiliar with Leninism.  Most progressives instead went for the Stalinist interpretation, namely that the Trotskyites were simply splitters who endangered the common cause.  In the end, the Spanish war turned out to be a gigantic clusterf*ck for all leftists and progressive forces in general.  To this day the three main leftist factions — Stalinists, Trotskyists and Anarchists — blame each other for the debacle.  And this war also marked a dubious watershed:  When the Stalin-Trotsky Schism drew first blood in a European nation.  Trotsky accused the Spanish Stalinists and Soviet GPU of setting up “kill squads” whose primary purpose was to kill Trotskyites (instead of Francoites).  This is what led to Trotsky’s frantic call for his supporters to set up their own defensive militias against the “killers”.

Fascism, a threat to Humanity: Both then and now…

Aside from all this drama, Professor Chase’s main point here, for the purposes of his monograph, being that Trotsky’s temporary wave of popularity (1937) came to nil within a year.  Due to the Spanish events, the rise of fascism in Europe (which brought more progressives flocking to the Soviet Union and to Comrade Stalin to protect them against the new threat), along with several other internal-political factors.  All of this is important because, according to Chase, Trotsky becomes so desperate that he maybe starts bending his own rules of conduct….

And so, Professor Chase has laid the Prosecutorial groundwork for his main thesis.  And we will continue on with this material soon enough, after a short break for other types of stories.  I hope y’all are enjoying this ripping tale so far!