Today I have for you this bitter philippic penned by the appropriately named Russian TV journalist Valentin Philippov.  Like a Roman Senator of the time of Cato the Elder, Philippov curses his native city, its corruption and cowardice, and everything that it has become in the past few years.

Odessa, the former Hero City, is no hero now, according to Philippov. Odessa: Used to be a Hero City.

Philippov left Odessa when the Maidanites seized the Ukrainian government.  His act of self-exile was both prudent and principled.  The Russian city of Odessa has been under foreign occupation before – most notably during World War II, by both Germans and Romanians.  But the people of Odessa always found a way to fight back and resist.  Hence the “Hero City” medals.

But once this current gang of Ukrainian nationalists along with their (N)ATO sponsors has been driven out, as logic insists they must, will the city of Odessa be receiving any medals for its Resistance?  Highly dubious.

Philippov takes as his starting point the recent news that Odessa supposedly won some kind of ideological victory against the Ukrainian occupiers.  When the latter wanted to rename a bunch of streets (with Russian and Soviet type names) in honor of Anti-Terror Operation (ATO) thugs, “Heavenly Hundreds”, Banderites, and assorted other criminals and riffraff.  Odessa City Council declined these proposals, renamed the streets anyhow, but to more neutral names, and then portrayed their timid compromise as a heroic act of Resistance.  Philippov mocks these politicians and curses their cowardice: 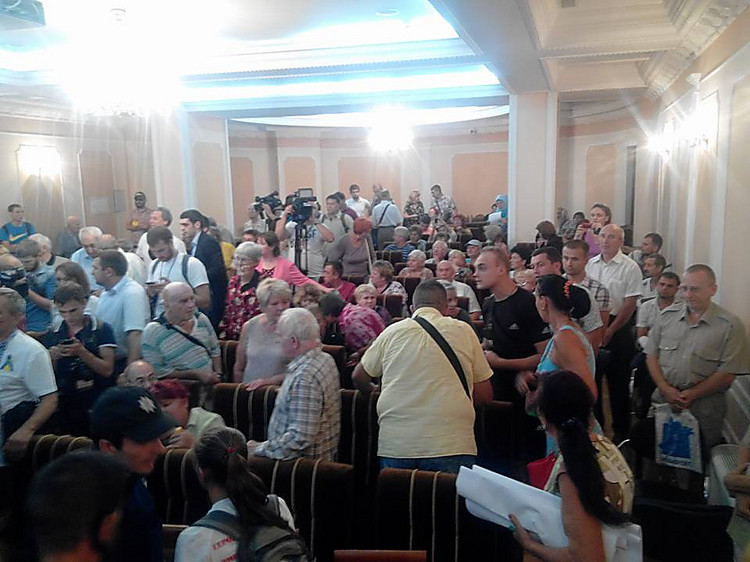 In Odessa City Council, a hockey game breaks out.

“Have we already forgotten, that this City Council officially named Russia as an aggressor-nation?  We pretended not to notice when they quartered ATO punishers in our apartments.  We pretended not to notice the Ukrainian hymns and flowers on Ukrainian Insurgent Army Day.  People acted like everything was normal.  Now they say they ‘resisted’.  Because they didn’t let the streets get renamed!  Well, they did let the streets get renamed, just not the ones tha were originally proposed.  Big deal.”

Philippov provides some examples of the Street-Renaming project, which is a component of the “de-Communization” policies of the Ukrainian nationalists.  But not just toponyms with Communist names (such as “Leningrad Street” or “Battle of Stalingrad Street”) — even just plain Russian names, and even just anything with the word “Red” in it.

Mayor Trukhanov: Has his cake and eats it too.

“To be sure, the City Council took no pleasure in renaming the streets.  This was a measure that was absolutely forced upon them.  The Nazis even threatened them and attempted to disrupt the voting.  But for sure, people say, Mayor Trukhanov scolded [the Nazis] and asked them to leave!  Again, big deal.  Trukhanov has nothing to fear from these people.  His entourage includes not only Nazis, but even the most notable of the Nazis.  Those who proved themselves with the murder of Odessites on Kulikovo Field on May 2, 2014.

“I’m not joking.  It was precisely those murderers who are now on the payroll of Odessa Mayor Gennady Trukhanov.  It is precisely these people who break up the protests of other nationalists against the so-called ‘pro-Russian’ mayor.  This is known to everyone, even to the statue of Pushkin in front of City Council, whom the Odessans carefully erected with his backside facing that whorehouse.

“We don’t need any more fairy tales,” Philippov continues his rant.  “We don’t need to hear how on May 3, 2014 Trukhanov sat on the curb outside the Trade Union building and wept quietly, rubbing his tears against his bald pate.  This is all a lie.  He had his chance to become a real man.  He had the means and the ability, enough henchmen of his own, to drive all that Nazi filth out of the city.  On that very day, May 2, 2014.  But he didn’t.  And please don’t tell me how he was threatened.  So what?  Does he plan to live forever?

“What Odessa has is not a life any more.  Odessa is Hell.  Odessa is Shame in the eyes of future generations.”