Here is still more continuation of the Miroslava Berdnik story.  Yesterday I provided some background on the Ukrainian nationalists and their never-slaked desire to extract revenge for their defeat in WWII.  Their elaborate plan for revenge has stretched out over the years and decades, leading to a vast diaspora of pro-Banderite families and the establishment of secret clubs of Ukrainian nationalists all over the world.  Clubs which plotted with powerful and sinister world leaders to bring their guys back into power.  Just like in some crazed Dan Brown novel, except that it’s all true! 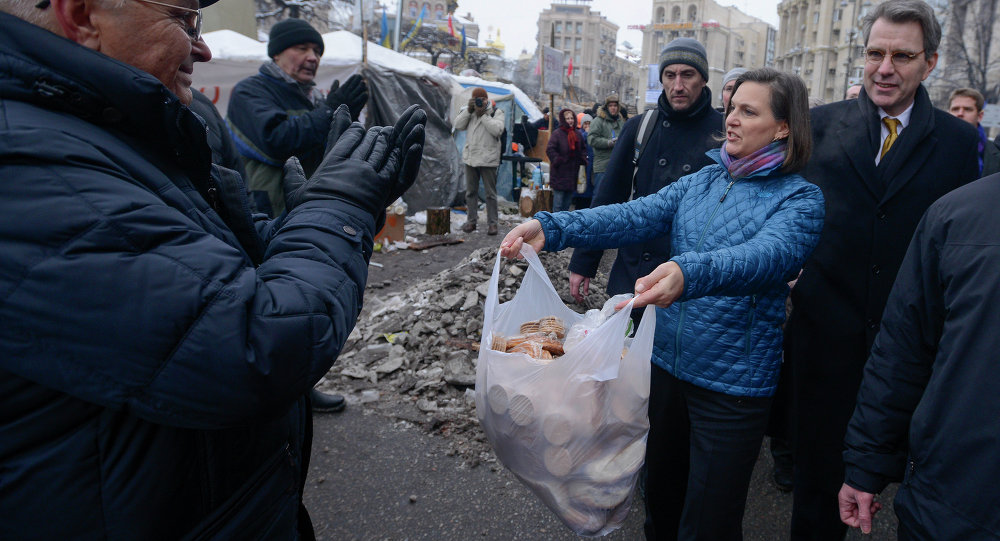 The Albino and the Cookie Monster. Even Dan Brown couldn’t imagine something this sinister.

What these nationalists failed to realize, is that even a Nazi victory in the war would not have brought them much — like I mentioned, the Germans had zero intention of establishing a sovereign Ukrainian national state.  For the Germans, this whole area was just prime real estate that needed to be cleansed of the local inhabitants.  Like spraying a house for bugs so that the real people can move into it.

Returning to the Miroslava Berdnik story….  Where we left off she had been arrested and charged with Statute 110 of the Ukrainian criminal codex.  Because she had the gall to write a book exposing the ludicrous history of Ukrainian natinalism.  Full disclosure:  I have not read Berdnik’s book.  But I don’t need to read it, to know that she has the right to write it.   Allude to the pseudo-Voltaire quote.

Here is what Miroslava herself had to say about her own book, which is entitled “Pawns In Another Man’s Game:  The Secret History of Ukrainian Nationalism“:

“This is a book about the history of Ukrainian nationalism, beginning with the lead-up to the first World War, and on into our own time.  My book is based on documents from the Ukrainian archives.  Therefore it is very difficult for me to understand, how the publication of historical documents can be considered an attack on the territorial integrity of the Ukraine.  However, it is extremely symbolic, how my books are being banned by the very same people who, in Soviet times, banned the books written by my father; who, by the way, was shot in the back during the war by Ukrainian nationalists when he was working to de-mine an area in Western Ukraine — he was removing mines from objects, necessities of life, which had been rigged up by the Banderite guerrillas, whose collaborationist essence I expose (in my book).”

Even prior to the official banning of her book, Berdnik was forced to flee from Kiev and take refuge with her relatives in Zaporozhie.  She was hiding from Ukrainian nationalists who had obtained her address in Kiev and probably meant to harm her.

As Miroslava mentioned, her dad was also a writer.  His name was Oles Berdnik.  During the years 1943-1945 he participated, as an ordinary soldier, in the Great Patriotic War.  Miroslava mentioned that he had been shot in the back by Banderites; however he apparently survived, because in Soviet times, the 60’s and 70’s Oles went on to become a science-fiction/fantasy writer.  Towards the end of the 70’s Oles became a political dissident and joined a “human rights” organization, becoming the founder of the Ukrainian Helsinki Group.  [yalensis:  probably not realizing that this movement was funded by one and the same shadowy éminences grises who also funded the Banderite diaspora and other “captive nations” type organizations, but I digress too much from Miroslava’s story…] Because of his activities in the Helsinki Group, Oles Berdnik was repressed by the Soviet government.  He was convicted of “anti-Soviet agitation and propaganda” and spent several years in prisons and labor camps.  In 1991 Oles ran for President of the new independent Ukraine.  Apparently he did not win, but apparently he is still alive, because he has some kind of web site, and I don’t see a date of death.  If Oles is still alive, then he must be pretty old by now, but presumably he is proud of his daughter for standing up for what she believes in.

Miroslava has her own daughter, a young woman named Irina Bessmertnaya, who is of college age and who was also taken to SBU headquarters to be interrogated.  According to a family friend Alexander Chalenko, a journalist who writes for UKRAINA.RU:  “Irina is a student in one of the Kiev colleges.  She was spending the break with her mom in Zaporozhie.”  Chalenko speculates that the timing of the detention of mother and daughter might have something to do with the recent events in Crimea, where the Russian army captured some “diversionary” special-forces types sent by the Ukrainian army to stir things up.  Perhaps, speculates Chalenko, the Ukrainian government decided to get even by arresting the few remaining-at-large “pro-Russian” journalists and activists.  There is also the fact that Zaporozhie, located right next to the Donbass, is on the front lines of the Ukrainian civil war.

Ukrainian political writer Vladimir Kornilov is worried about Miroslava, because “she is a very sick person.  She has a chronic illness and during the past two years had several operations.  She needs special medications.”  Kornilov also points out how another dissident, 60-year-old journalist Sergei Dolgov, had been dragged into that same Zaporozhie SBU HQ, and nothing has been heard of him since.

When last we heard, Berdnik is still alive if not well.  Most likely because of the international attention her case has received.  In her new blog, for example, Berdnik posts this piece from the Italian press, about her case.

In this other blogpost, Berdnik posts a very moving re-telling of the story of Jesus and his physical Transfiguration.  Berdnik tells the Christian story with religious and philosophical feeling, as of one who fears for the future but hopes for the possibility of salvation and physical transformation.  (Making me think that perhaps I was wrong when I speculated that Berdnik is Jewish, not that it matters.)

Here is Berdnik’s retelling of the Jesus Transfiguration story

Once Jesus told his pupils that among them are those “who will not taste death but will live to see the Kingdom of Heaven”.  And six days later He went to pray at Mount Tabor (588 meters high, 9 km away from Nazareth), and he took with him John, Jacob, and Peter.

Saint John of the Golden Mouth

While Christ was praying, his apostles, exhausted by the long trip and the ascent up the mountain, fell asleep.  And when they awoke, they saw their Teacher transformed:  His face shone like the Sun, and his garments had become white and glowing, like the snow in the sunlight.  Moreover, Jesus was not alone, he was conversing with the ancient prophets Elijah and Moses.  His pupils overheard fragments of the conversation — about the suffering and death awaiting the Savior.  But at that moment the apostles were overcome by a feeling of unusual joy.

As soon as the prophets had departed, the apostles were covered by a light cloud.  From the cloud boomed the voice of God the Father:  “This is my beloved son, in whom I am well pleased.  Listen to him!”  In terror the apostles fell onto the ground.  But Jesus touched them and said:  “Stand up and do not fear.”  When the pupils got up, they saw him once again in his usual form.  And Jesus commanded them not to tell anybody what they had seen, until the day when he should arise from the dead.

But why were the apostles so joyous?  For one main reason:  They were given a “premonition” of the Kingdom of God.  John Chrysostom writes, to be sure, that the Lord only revealed a tiny part of the truth to them about his Divinity — just enough that they could handle.  But it was enough that Peter could exclaim in rapture:  “Lord!  It is so good to be here!”

Raphael: The Transfiguration of the Lord

Jesus shone like the sun while still preserving his human features.  Apparently this is what happens to the righteous, and these are the kinds of bodies acquired after the resurrection of the dead.  Indeed, even before his ascent onto Mount Tabor Jesus had remarked that “the righteous shall glow like the sun, in the Kingdom of their Father.”

The first historical references to the Holiday celebrating the Transfiguration of Jesus, are found at the beginning of the 4th Century A.D.  Since ancient times, the blessing of vineyards has been connected with this holiday.  In those places where grapevines do not grow, other types of fruits are blessed.  (For example), in ancient Rus this day came to known, among common people, as the “Apple Easter”.

Like Loading...
This entry was posted in Breaking News, Human Dignity, Russian History and tagged Miroslava Berdnik. Bookmark the permalink.