This is a continuation of yesterday’s story.  Where we left off:

So, this bloke Putin was attending a discussion forum at the Kurchatov Institute in Moscow.  That’s the place where elite Russian egg-headed scientists cook the nukes.  An institution that is also, just by curious coincidence, in the news this past week for a completely different reason:

The Kurchatov Institute, Moscow. The scene of the crime.

Because twas there, according to the British government and its dishonest politically-motivated and corrupt court system [I am allowed to make such broad statments because, well, that’s what THEY do too!], that Vladimir Putin, the Russian Head of State,  “probably” acquired the polonium with which he “probably” poisoned British-Russian (spy, traitor, and double-agent) Alexander Litvinenko.  A different Alexander, name of  Goldfarb, one of the men who figures in this sordid case as a witness for the Prosecution (later recanting part of his story), actually worked at the Kurchatov Institute before emigrating from the USSR in 1975.  Implication being, that Goldfarb knew his way around a tube of polonium!

Western anti-Russian press is all over this Litvinenko case.  This is THE BOMB to them!  Their screams of joy, fury and righteous indignation reach to the highest heavens above.  But they no longer have a monopoly of “guiding men’s minds and thoughts,” in the words of Boris Pasternak.  See, in a different sector of public opinion, the Russia-friendly blogosphere is equally busy tearing holes in this story cooked up by an archaic British monarchist and anti-constitutional system.  While humorously mocking the British court’s stout-hearted declaration that “I think mostly likely, yes, probably, slightly within the boundaries of Reasonable Doubt, but yeah, we think HE DUNNIT.”

Sidebar over, and continuing on with my own story, which is NOT Litvinenko-related, I believe that most likely, “probably”, Putin’s appearance at the Kurchatov Institute on Thursday was just a coincidence and had nothing to do with the Litvinenko case.  Unless Putin was there trolling for some more polonium, and got distracted when a spontaneous poetry reading broke out.

The real problem is, that during his visit to the Doctor Atomic Institute, Putin did something which, in my own personal opinion, is WAY more reprehensible than “probably” executing a traitor and double agent.  They say that “In the beginning was the Word”, and sure enough, Putin uttered some words which have the effect of dividing Russian society.  Into two sorts of people:  The cool ones (=the anti-Communist Elites, the rich capitalists and their ideological camarillas), and the stupid ones (the “sovoks“, the “vatniki“).

(“He started his speech.  We remember.
And we honor the monuments of the fallen.”)
(Boris Pasternak, “Illness”)

Recall that the Director of the Kurchatov Institute, name of Mikhail Kovalchuk, decided to show off his knowledge of Russian poetry, while at the same time implicity praising the current Russian President.  By comparing him to the great Bolshevik leader V.I. Lenin!

Don’t worry, I LIKE you guys! Now write a poem about ME!

Now, I have no idea what are Kovalchuk’s political views, whether he is a Communist or anti-Communist or something in between.  Kovalchuk most likely knew that Pasternak’s  awesome poem was partly about Lenin; mostly about the poet’s attitude to the Bolshevik leader and to his untimely death.  Or maybe Kovalchuk didn’t know this.  Pasternak’s poem is not only brilliant, but also very long, dense, and complex.  It’s the kind of poem that you would spend an entire college semester studying, maybe even writing your thesis on, under the mentorship of a professor who spent their life studying 20th-century Russian poetry.  Pasternak’s poem is not as “in your face” pro-Leninist as, say Mayakovsky’s Lenin poem, polished in the fervor and grief of Lenin’s death.  An event which shook up the Russian intelligentsia, men such as Mayakovsky and Pasternak, filling them with grief and apprehension, for the future of Russia, and their own role in the future state.

Well, they needn’t have fretted.  After all, it was just kindly Uncle Joe who came to power!

Like I mentioned yesterday, Kovalchuk, showing off his literary chops, quoted to Putin these lines from Pasternak’s poem:

(“But then, once having seen him [Lenin] in person, I was thinking and thinking about it, About his authority and what right does he have to take such risks in our name?”)

Kovalchuk then threw in another verse from Pasternak’s poem, improvising by prefixing with his own “Ответ такой:”

(“The answer is this:  He was able to guide men’s thoughts and only because of this, was able to lead the country.”)

And to this poetic outburst, President Putin countered, in some apparent irritation, with the following utterance:

“Guiding men’s thoughts – that’s all for the good.  The only thing is that it is necessary for these thoughts to lead to the correct results.  Which did NOT happen with Vladimir Ilyich.  And in fact, these ‘thoughts’ led to the collapse of the Soviet Union, that’s a fact.  The [Bolsheviks] had many such thoughts and ideas:  autonomies and so on.  They [the Bolsheviks] laid an atom bomb under the edifice which we call Russia.  And that’s why it collapsed.  We had no need for a world revolution.  That’s the sort of ‘thought’ that they were engaged in.”

Putting aside just a second the utter indelicacy of a Yeltsin’s protege blaming Ilyich for the dissolution of the Soviet Union… But I digress…  In the course of this single utterance, Putin dissed an entire segment of Russian society, people who vote for the Communist Party in regional elections.  He dissed people who honor the past achievements of their parents and grandparents; people who lived in a system devised by Lenin, and who sacrificed and worked their fingers to the bone creating national wealth.  Wealth which Putin’s mentor, Boris Yeltsin, gave away like candy to his oligarchic cronies.  Even worse than that:  Putin dissed the people of Donbass, Ukraine:  people, like ordinary coal miners, who came out into the streets to defend statues of Lenin against neo-Nazi vandals.  In this single utterance, Putin in essence laid a mine under the delicate balance of Russian society, the ever-lasting war between the Elites and the People.

Napoleon vs the Jacobins?

From what I have read of French history, Napoleon faced a very similar problem to Putin’s:  The great French leader, like Putin, came to power on the crest of a counter-revolution.  And yet it was his job to be, or least attempt to be, a “unifying factor” in French society.  His government rehabilitated aristos, but did not persecute nor disrespect ex-Jacobins.

The stability of French society required a certain “forgive and forget” attitude.  And a re-uniting of former class enemies around a common national goal.

In Russia, the counter-revolution engineered by Gorbachev, Yeltsin and their acolytes such as Putin, brought to power a ruthless and corrupt capitalist elite.  An elite which had NO national goal.  Only the personal goals of greedy men to enrich themselves, while economically enslaving others. 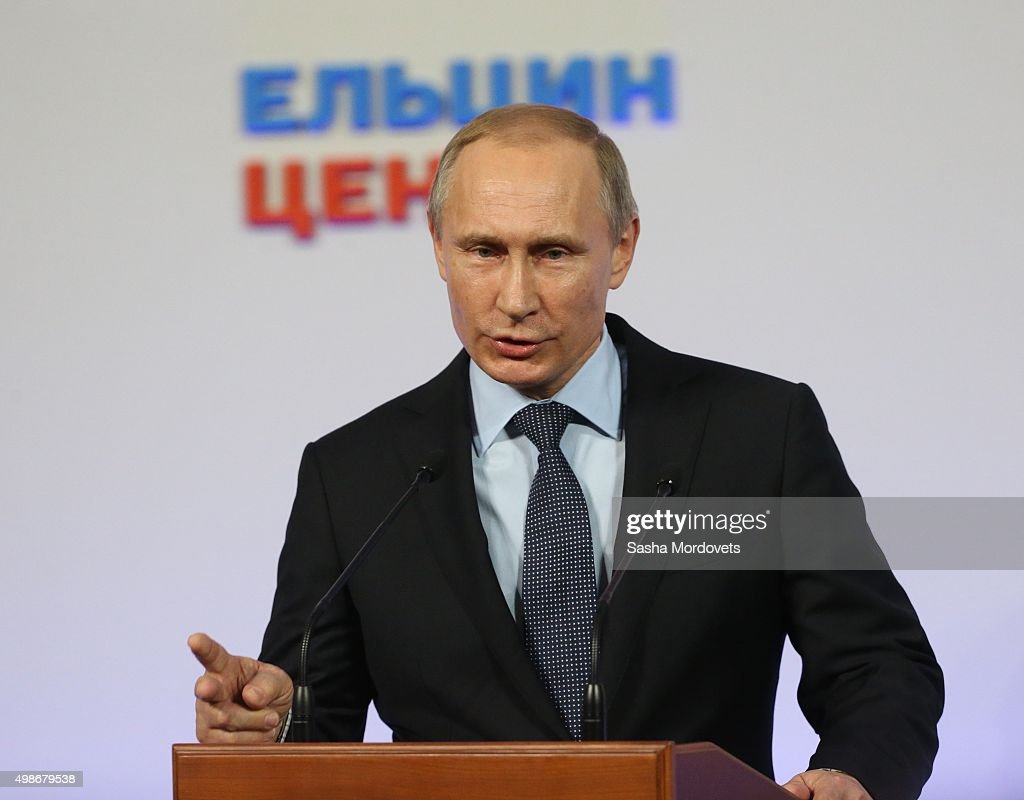 But “Le peuple” were tossed a bone:  They could keep their holidays, their Victory Day, the Banner of Victory, the street names, the Lenin statues and some relics of Soviet civilization.  Lenin would remain mummified in his Mausoleum.  There was Bread, there were Circuses, there were Bush’s Little Legs.  All this as compensation for the loss of vast territories; national wealth; warm-water ports; an independent foreign policy; national dignity; no more “friendship of the peoples”, and worst of all, a slap in the face to the innate dignity of the Working Man.

And thus, Inquiring Minds are hereby allowed to inquire ironically, Who exactly was the man who “laid an atom bomb under the edifice which we call Russia”  ?  Who indeed?

Next:  Those Pesky Autonomies, and other Negative Reaction

[this Philippic to be continued]