When None Dare Call It Treason – Part II

Posted on December 21, 2015 by yalensis
Treason doth never prosper, what’s the reason?
For if it prosper, none dare call it Treason.
John Harington

Boris: “All is proceeding according to the Plan, my Lord and Master.”

Proceeding with my plan…

Here is the link to the KP page which contains the now de-classified stenograms.

When Treason is afoot… James Baker is always Jimmy-on-the-spot!

Well, that’s HIS side of the story.  Now let’s read the transcripts, in my English-language translation, and I will let readers decide for themselves, whether or not the Yeltsin-Gorbachev tandem were heroes or traitors.  After all, as Marcus Tullius Cicero used to say:

[but first the Official yalensis Disclaimer]:

The transcripts, as printed by KP, are in Russian.  I am going to make an assumption here that Bush was talking in Texan and Yeltsin in Russian; and that some type of translation occurred via the intermediary of human simultaneous interpretors.  Having said that, I don’t have the English side of the conversation, only the Russian.  Therefore, as a disclaimer:  What I translate from Russian back into English may not match the original English words as spoken by President Bush Daddy.  However, in order to make my translation more authentic and add to the verisimilitude, I may from time to time add some colorful touches in the Texas dialect. 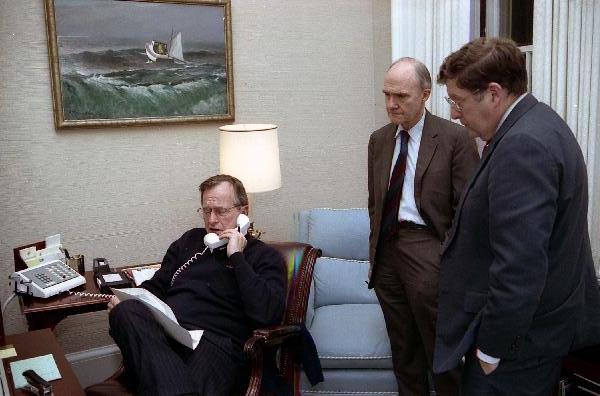 Yeltsin:  Hello, Mr. President.  I am very happy to greet you.  Mr. President, you and I have agreed in the past, that in the event of circumstances of extraordinary importance, we are to inform one another, I – you, and you – me.  Today in our nation a very important event has taken place, and I wanted to personally inform you what has happened, before you read this in the newspapers.

Bush:  All right, thank you.

Yeltsin:  We met today, Mr. President, we the leaders of three republics:  Belorussia, Ukraine, and Russia.  We met, and after many lengthy discussions, which lasted almost two days, we came to the conclusion that the existing system, and the Union Agreement, which they [?] are trying to convince us to sign, does not suit us.  Therefore we met together and literally several minutes ago, we signed a joint declaration.  Mr. President, we, the leaders of the three republics — Belorussia, Ukraine and Russia — asserting that the negotiations about the new [Union] agreement have gone into a dead end, are cognizant of the objective reasons, according to which the creation of independent republics has become a reality.  Aside from that, noting that the quite short-sighted politics of the center has led us to economic and political crisis, which has touched all the spheres of production, and various layers of the population, we, the confederation of independent states of Belorussia, Ukraine and Russia, have signed an agreement.  This agreement, consisting of 16 clauses, in essence, confirms the creation of a commonwealth or group of independent republics.

Yeltsin:  The members of this commonwealth put as their goal, the strengthening of international peace and security.  They also guarantee the observance of all international obligations within the framework of treaties signed by the former Union, among others (repayment of) external debt.  We also support a unitary control over the nuclear arsenal and non-proliferation.  These agreements were signed by the heads of all three governments participating in these negotiations:  Belorussia, Ukraine, and Russia.

Yeltsin:  In the room, from which I am calling you, together with me, are the President of the Ukraine, and the Chairman of the Supreme Soviet of Belorussia.  I also just finished speaking with the President of Kazakhstan, Nazarbaev.  I read out to him the full text of the agreement, including all 16 clauses.  He fully supports all of our actions, and is prepared to sign the agreement.  Very shortly he will fly into the Minsk airport, in order to add his signature.

Yeltsin:  This is extremely important.  These four republics produce 90% of the entire gross production of the Soviet Union.  This is an attempt to preserve this commonwealth, while liberating us from the total control of the center which, for the past 70 years, has been giving all the orders.  This is a very serious step, but we hope, we are convinced, we are sure, that this is the only way out of the critical situation, in which we have found ourselves.

Yeltsin:  Mr. President, I must tell you in confidence, that President Gorbachev does not know about any of this.  He knew about our intention to meet, in fact I myself told him that we are planning to meet.  Naturally, we will send him right away the text of our agreement since, no doubt, he will have to make certain decisions at his level.  Mr. President, I have been today very, very open with you.  We, four governments, believe that there exists only one possible way out of the critical situation which has come about.  We don’t want to do anything in secret, we will shortly issue a press release.  We hope for your understanding.

Bush:  Boris, I am grateful to you for your call, and for your forthrightness.  We will immediately study these 16 clauses.  What do you think, what will be the reaction of the Center?

Yelstin:  For starters, I have spoken with the Defense Minister [Yevgeny] Shaposhnikov.  I want to read out (to you) the sixth clause of the agreement.  Shaposhnikov in fact is fully in agreement, and supports our position.  And now I will read out to you this Clause #6…

Bush (cutting him off):  That’s okay, we of course want to fully study all of this.  We understand that these processes must be decided by the participants, and not by third parties, such as the United States.

Yeltsin:  We guarantee that, Mr. President!

Bush:  Well then, I wish you luck, and thanks for your call.  We will await to see the reaction of the Center, and the other republics.  Only time will tell, I think.

Yeltsin:  I am convinced that all the other republics will understand us, and will soon want to join us.

Bush:  Once again, thanks for your call, after such a historical event.

5 Responses to When None Dare Call It Treason – Part II